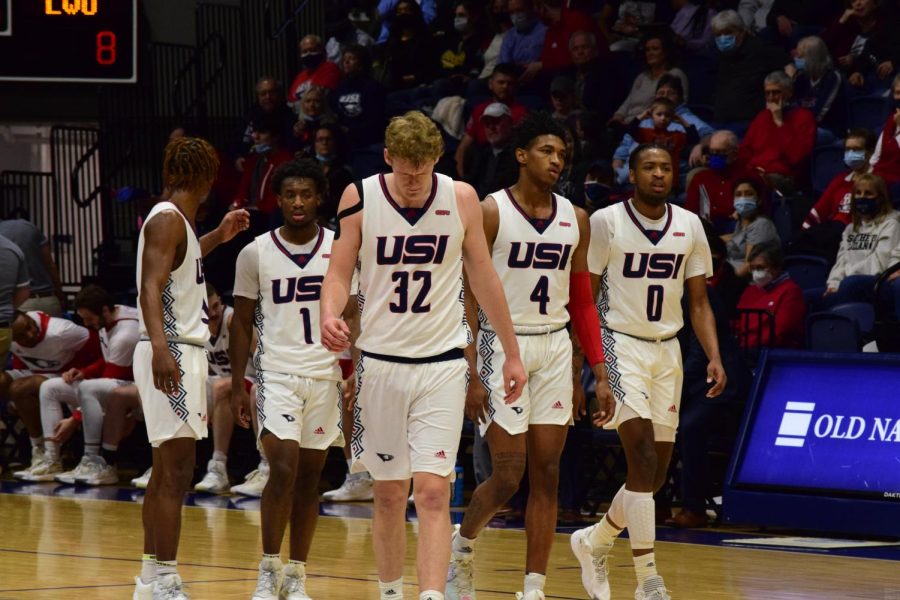 What you missed this year – The Shield

ISU is going to Division I. The 2021-22 season is almost in the books, and the Great Lakes Valley Conference’s 43-year run is coming to an end. USI has been an important player in the GLVC over the years.

I think the news of the transition overshadowed a few notable moments over the past year and maybe even added more pressure on the teams. The thing is, USI always competes at the highest level. Recruiting, training, games and some outstanding achievements have been swept under the rug.

The 2022-23 sports seasons will be among the most exciting in ISU history. Let’s not forget this year’s defining moments as USI’s relationship with the GLVC ends in a fashionable handshake and good play.

At the time of coach Rick Stein’s victory, ISU was ranked No. 25 in NCAA Division II women’s basketball. Undefeated in the GLVC with an 11-2 regular season record, Stein earned his 400th win against the University of Illinois-Springfield. The team rallied after being brought down in the first half and won in a 6-0 run in the final 20 seconds. After the victory, the girls invaded Stein with love. Who doesn’t love a great sports story like this? Stein had a legendary career here at USI, and I guarantee he will go on to do great things with the Ohio Valley Conference team.

Women’s softball head coach Sue Kunkle is a legend. That’s about all I have to say. In her 21st year coaching ISU softball, Kunkle became the only female coach in ISU history to achieve 600 wins. Kunkle has led the softball team to a No. 3 ranking while posting a Record of 36-10 in the regular season and 22-2 in the GLVC. The women still have four games this weekend before the GLVC tournament. I strongly expect them to do well. We cannot end a season like this without a title. All I can say is that this team will do some damage in the weeks to come. Kunkle is the cement of this softball team’s success.

Induction of eight members for the Hall of Fame 2022 class:

The USI Class of 2022 Hall of Fame was announced on December 22, 2021, with the induction ceremony on February 4. I don’t know anyone else, but I haven’t heard of this announcement. A Hall of Fame class is usually a big deal in the sports world. I think this event was overshadowed by COVID-19, and of course, the excitement behind the Division I announcement on February 7th. The Hall of Fame symbolizes success, dedication, sacrifice and loyalty to a sport.

Danielle LaGrange 2012: LaGrange was a volleyball powerhouse holding almost every accolade imaginable. She is second in attack percentage; seventh in block assists; eighth in wins; and tenth in total blocks. LaGrange earned AVCA All-American honors, which were the program’s highest to date. She was also the third ISU volleyball player to be awarded the GLVC Player of the Year in 2011.

Trevor Leach 2007-11: Leach is probably the best pitcher ISU has come across. He holds USI records with 33 wins, 86 appearances, 357 innings pitched and 246 strikeouts. He was All-American in 2010; first team All-Region for three consecutive years; and first team All-GLVC twice. He currently holds the ISU winning record at 12-1 in a season.

Jamar Smith 2008–10: Smith holds the PAC record of 40 points in a game and the ISU record of 20.2 points per game. Smith was named NCAA Division II Player of the Year for the 2009-10 season. He also holds USI records for most threes in a game with 10 and most threes in a season with 108. Both Smith and Loete were known for the work they put in after the tragic death of Jeron Lewis .

2010 Baseball Team: The 2010 Baseball Team is the 2010 Division II National Champions, holding the winning record with a 52-14 season. The team has had seven All-GLVC honors, three All-Region players and two All-Americans.

The great basketball recruits for the coming season:

If you’re a fan of USI sports, it’s no secret Coach Stan Gouard and the rest of the basketball team have been making moves during the transfer window. USI seemed to raise some eyebrows with some big names not getting as much attention in their respective schools. The team added freshman AJ Smith, sophomores Nick Hittle and Ryan Hall, and seniors Kejuan Clements and Trevor Lakes.

After a few years in prep school, Smith finished his senior season at Metro-East Lutheran in Illinois averaging 22.1 points and 9.2 rebounds. The 6-foot-6 guard will bring explosiveness and excitement to the OVC for the foreseeable future with four years of eligibility.

ICU was looking to add more snipers, and the 6 foot guard hall fits that category. Coming from JUCO School, Iowa Lakes, Hall brings with him a 13.1 point average. Hall shot 34% from the deep line, and his freshman had an impressive 41%.

In the same class, we can discuss Hittle. Standing at 6-foot-10, Hittle can shoot from downtown. Also hitting 41% from three, he averaged 2.9 points and 1.1 rebounds. I hope to see this guy get more minutes to see what he can really do. Senior forward Jacob Polakovich may have lost a great player this year, but he has gained another new and respected one.

Lakes will also be there. Lakes is transferred from Nebraska of the Big 10. Lakes was initially recruited by Gouard at the University of Indianapolis. The man who started his university career must also finish it. Lakes also played alongside Polakovich at UIndy. Lakes is described as a sharpshooter, shooting around 40% of threes.

There’s no doubt that these new recruits will fit in with the guys we already know. I think they’ll be sleepers going into their first year of OVC, especially with all of the OVC moves in the last year.

The swimming and diving teams, as well as the men’s soccer team, are still looking for their Division I home. The OVC does not have either of those respective sports. After the announcement at the OVC on Feb. 9, there was already speculation as to where the teams would land. They are still in negotiations and no new information has been released on the fate of the teams as of press time. Will they land in one of the conferences that was also being considered alongside the OVC. Maybe the Horizon League of the Atlantic Suns Conference? Who can say at this point. Coaches weren’t available for comment at this time, but I’m curious how Cameron Kainer, head coach of the men’s and women’s swimming and diving programs, is currently recruiting. After spending the year building a team for Division II, he now has to rethink the entire recruiting process for Division I. I’m very interested to see how these teams will start next year.

The 2021-22 seasons have been meaningful, impactful and a memorable year.

It was the first year to return to normal sport after COVID-19. USI is going to have a blast stepping into the OVC because it’s an exciting time in USI’s history, and we’re experiencing it. This year, we’ve seen dunks from Polakovich, the Winders winning two national titles, and outstanding accomplishments as a coach. Attendance is starting to return to normal after the long season without supporters. The excitement of summer can only grow into the fall seasons of 2022. Overall I think this year has been full of excitement and next year will just be the start of something great big.

Repayment of student loans while unemployed