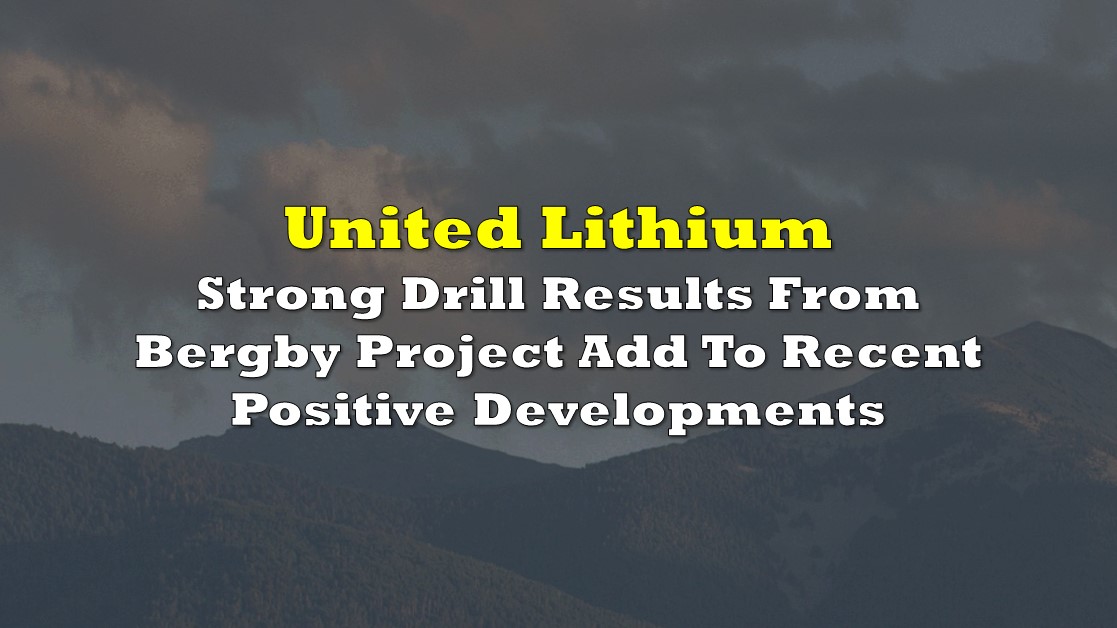 In addition, a soil sampling program near the source of the northern spodumene block train was completed and the collected samples were processed and sent to the laboratory to be analyzed for lithium, cesium, rubidium and tantalum. .

Mapping and sampling results show that the mineralized pegmatite zone is larger than originally predicted and the company believes there is “significant potential to discover more lithium-containing pegmatite dykes,” according to CEO Michael Dehn. This is in addition to the larger section of the property which has been identified with boulders containing spodumene. These developments prompted United Lithium to expand its land position in Bergby to over 10,458 hectares by acquiring four additional contiguous claims to explore other potential targets.

The Bergby project in central Sweden is supported by excellent road, rail and electrical infrastructure, and a core logging and cutting facility has been established at the port of Norrsundet, which is just 4 kilometers from the site of drilling. The port also has excellent infrastructure and can handle industrial applications, which will be important for United Lithium as it processes its lithium oxides and carbonates for transport to the gigafactory’s European customers.

Regarding processing, in March 2021, United announced that it had partnered with Process Research Ortech, based in Mississauga, Ont., To develop a proprietary leaching and purification protocol for hard rock lithium deposits. Lithium processing is essentially a chemical engineering exercise, where lithium-containing pegmatite rock is processed to extract lithium from the rocks, then converted to lithium oxides or lithium carbonates, which are then sold to end user customers. The objective of the chemical treatment is to obtain the highest quality lithium recoveries.

The Ortech collaboration will develop a preliminary ore processing and metallurgical process to recover lithium from hard rock spodumene mineralization. It involves processing the minerals spodumene and petalite to remove all impurities such as iron, aluminum, zinc, etc. which could reduce the quality of lithium, in order to recover the highest possible qualities of lithium carbonate.

If the process proves to be effective, the company plans to use what it considers to be a greener and more environmentally friendly process that can be achieved with lower temperatures, less chemical requirements and less time. reduced processing compared to existing methodologies. The technology is intended to be used to process lithium ore containing spodumene and pegmatite at Bergby to optimize its own lithium recoveries. This will give United Lithium the ability to generate income from the ore it processes for delivery, without the need to build a massive processing plant until the project economics support it.

Lithium is an essential building block for the manufacture of lithium-ion batteries for the electric vehicle industry and demand is currently outstripping supply as the world moves quickly to reduce carbon emissions to combat change. climate. Many countries have already demanded that gasoline vehicles be phased out by 2030, which will lead to a boom in global electric vehicle manufacturing and the resulting investments in the gigantic battery factories that produce the technologies needed to power electric vehicles. . Construction of 25 gigafactories is currently planned in Europe alone.

United Lithium is well positioned to supply European factories with lithium from its Bergby project in Sweden and the Kietyönmäki project in Finland, both at an advanced stage of development. In both projects, the lithium deposits are located above and near the surface, which will allow profitable mining and lithium concentrates can be sold in the European Union duty free.

Surprising recent results in Bergby indicate that the potential of the project has been greatly enhanced. By having the ability to use its proprietary chemical extraction process to achieve well above average quality lithium recoveries, this will give ULTH a distinct competitive advantage in the industry. With only 52.78 million shares outstanding and a modest market cap of $ 60.4 million, United Lithium appears to represent a reasonably modest risk lithium exploration game with direct exposure to strong European EV markets. and batteries.

FULL DISCLOSURE: United Lithium is a customer of Canacom Group, the parent company of The Deep Dive. The author was paid to cover United Lithium on The Deep Dive, with The Deep Dive having full editorial control. In addition, the author personally owns shares in the company. Not a buy or sell recommendation. Always do additional research and consult a professional before purchasing a title.