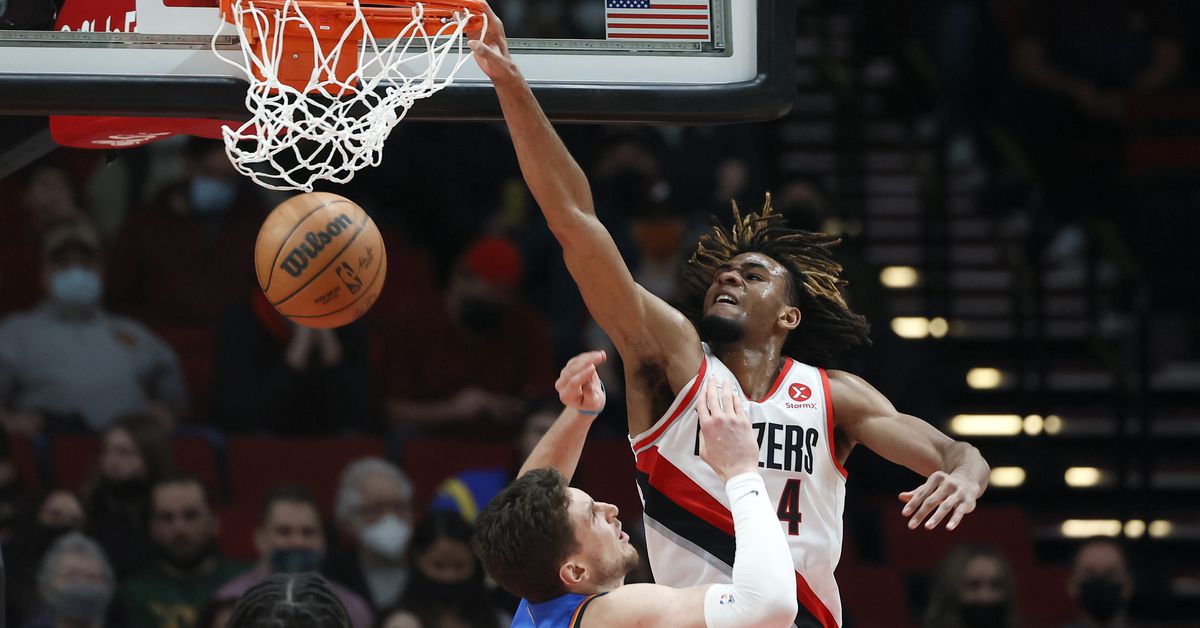 In a game that had NBA fans and analysts at the edges of their seats for its sheer scale, the Portland Trail Blazers and Oklahoma City Thunder faced off at the Moda Center in Portland on Friday night. The Blazers lost two starters – forwards Norman Powell and Robert Covington – in a mid-afternoon trade. The resulting team was small in size and short on offensive continuity, but played with reasonable energy. The Thunder being among the most modest of NBA winners didn’t hurt. Portland’s lack of coordination and Oklahoma City’s lack of talent combined to keep the game tight and somewhat scrappy.

Lack of attack characterized the affair, coupled with turnovers and plenty of crazy play. With both teams running out of pace, Oklahoma City’s familiarity with each other gave them an advantage. A somewhat tight defense in the fourth period made up for OKC’s total lack of attack. The Thunder picked up a 96-93 win.

CJ McCollum scored 19 in the loss, but only shot 9-24 from the floor. Anfernee Simons added 19 on a 7-15 shot. Jusuf Nurkic was a solid rock everywhere except on offense, where he was a big brick, shooting 6-19 for 14 points. He had 16 rebounds, however, 7 offensive.

Together the teams have combined for 73 marks in 188 shots.

The Thunder have taken inspiration from many Portland opponents of late, taking the ball inside against an intermittent defense. Because they’re in Oklahoma City, they hit a few and missed others. The Blazers, meanwhile, bombarded with sweaters. Ditto on efficiency there. Since both teams were semi-putrid on offense, Oklahoma City’s inside game paid better dividends than Portland’s perimeter offense. The Thunder led 11-6 halfway through the first.

At that point, Jusuf Nurkic (and sanity) took over. The Blazers put the ball inside for easier buckets. They even shot just like that. Guards and forwards caught on too, finding out that the Thunder weren’t very good at stopping penetration. All of a sudden, Portland was scoring on dunks and floats instead of bricking from 20 feet.

That’s how it went for the period. The team that went inside scored inside. OKC led 21-19 after one.

Portland’s three FINALLY started to fall in the second period. This boosted their score from terrible to very good. They haven’t stopped their inside attack either. The only thing that bothered their style was a relatively slow pace. Their shots came out of half-court sets… shaky half-court sets to boot. They managed not to return the ball. It was good. But their decision-making was laborious. Brown continued to excel. Tony Snell stroked sweaters. OKC also scored, but not as much as Portland. When Anfernee Simons hit a nice sideline float at the buzzer, the Blazers were leading 50-46 at the break.

Oklahoma City must have texted too much at halftime as their offense ghosted them early in the third. They generated a few inside shots, but those were laborious. Portland more than matched them down the lane and hit deep as well. Jusuf Nurkic remained super active, crashing mostly for offensive rebounds. Even with their imperfections exposed, Portland opened up a double-digit lead.

OKC settled down midway through the period, passing effectively to set up three points. This reduced Portland’s advantage to a manageable size and then to nothing. An 11-2 run, based on three runs, made Portland 67-66 with 4:30 left in the period.

The teams traded buckets for the rest of the third. The Blazers occasionally stroked the sweet distance between their many on-screen plays. It was enough to keep them afloat even when the thunder turned hot. Portland led 76-75 after three.

The start of the fourth featured some fine individual play, but neither team could muster a strong enough run to take over. Oklahoma City caught up to Portland’s screens, piling up dribblers before they could make any moves or shots. Predictably, the Blazers were bad at improvising when Plan A went astray. At least they had a plan A. Every trip upstairs was a new adventure for the Thunder. The relative lack of scoring in this whole mess kept the scoreboard tight.

The game started to spin in the mid-minutes as the OKC defense found their rhythm and their rebounds picked up speed. The Thunder were no more talented than the Blazers, but their rosters had played together longer. When it was team time, they had the advantage.

Portland had a 4 minute 30 second drought. Oklahoma City didn’t get away with it. Their offense was too poor for that. But they built an 8-point lead with five minutes remaining.

In theory, it looked like Oklahoma City stubbornly defended a seven-point lead down the stretch. In practice, every lead is safe when no one scores.

McCollum finally broke the offensive silence with a layup at 1:59. Then he grabbed an offensive rebound 30 seconds later and put it back in place. The Blazers were back to business, dropping just 3 points with one minute remaining.

Unfortunately, Portland’s next possession resulted in a turnover following an attempted pass from Simons to Nurkic. The next one saw McCollum miss another layup, then foul the Thunder on the rebound. Mamadi Diakite made the free throws – literally the only way OKC scored in the final minutes – and it won the game. Simons hit a layup and one at the very end to close it. Luguentz Dort only hit 1 of 2 free throws, leaving his team in 3 with the ball in Portland’s hands. Simons’ three wouldn’t fall, however, and that was it.

Stay tuned for an in-depth analysis of the game!

The score of the box

The Blazers get the Milwaukee dollars tomorrow evening at 7 p.m.

Swim and Dive honors seniors ahead of big day against UNF