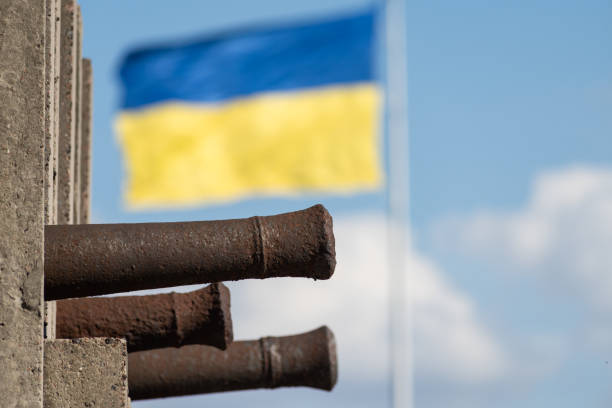 The surge in gold and oil following the Russian invasion, stocks and the fall of the euro

Russia’s invasion of Ukraine remains the dominant theme in the markets today. The safe haven flow pushes gold to the highest level in over a year, heading towards the 2k handle. WTI Crude Oil also breaks above the 100 level, rising as it does in geopolitical tensions. In the currency markets, the yen and the dollar are mostly the strongest, followed by the Swiss franc. The Euro and British Pound are weakest with the Kiwi. Aussie and Loonie are weak too, but not as bad as Euro and Pound.

Technically, the Yen seems to have a slight advantage against the Swiss Franc in the current risk aversion trade, with CHF/JPY notably dipping today. The immediate focus will be on the short term trendline (now at 124.01) and support at 123.52. A firm breakout of this area will complete a head and shoulders pattern (ls: 125.48; h: 127.05; rs: 125.56). In this case, CHF/JPY would likely dip further towards the long-term channel support (now at 120.23), before finding a bottom.

Note that the 4 hour MACD is clearly indicating that it is accelerating up. A firm break of 107.43 could lead to further acceleration towards a 100% projection at 118.75.

US GDP grew 7% annualized in Q4

According to the second estimate, US GDP grew at an annualized 7.0% in the fourth quarter. The raise of Real GDP mainly reflected increases in private investment in inventory, exports, PCE and non-residential fixed investment that were partly offset by decreases in federal, state and local government spending. Imports, which are a subtraction in the calculation of GDP, have increased.

ECB Stournaras: asset purchases should continue until the end of the year

ECB Governing Council member Yannis Stournaras said in an interview with Reuters that the asset purchase program should continue at least until the end of the year, to cushion the fallout from the Ukrainian crisis.

Stournaras added that the crisis
was expected to lower prices “in the medium to long term” after an initial spike. “In my view, this is going to have an inflationary effect in the short term – that is, prices will rise due to rising energy costs,” he said. “But in the medium to long term, I think the consequences will be deflationary through negative trade effects and of course through rising energy prices.”

BoJ Governor Haruhiko Kuroda told parliament: “Unlike Western countries, we have no immediate plans to reduce our monetary stimulus.” But the central bank will continue to monitor inflation expectations. “We will not only look at price indicators, but also surveys showing what the public thinks about price movements,” he added.

Regarding the exchange rate, Kuroda said, “If the yen weakens further, it could push up import costs. But the recent rise in import costs is mainly due to an increase in commodity prices denominated in dollars, rather than a weak yen.

“It is desirable that exchange rates move in a stable manner, reflecting economic fundamentals. I think the recent movements (in yen) are in line with this trend,” Kuroda added.