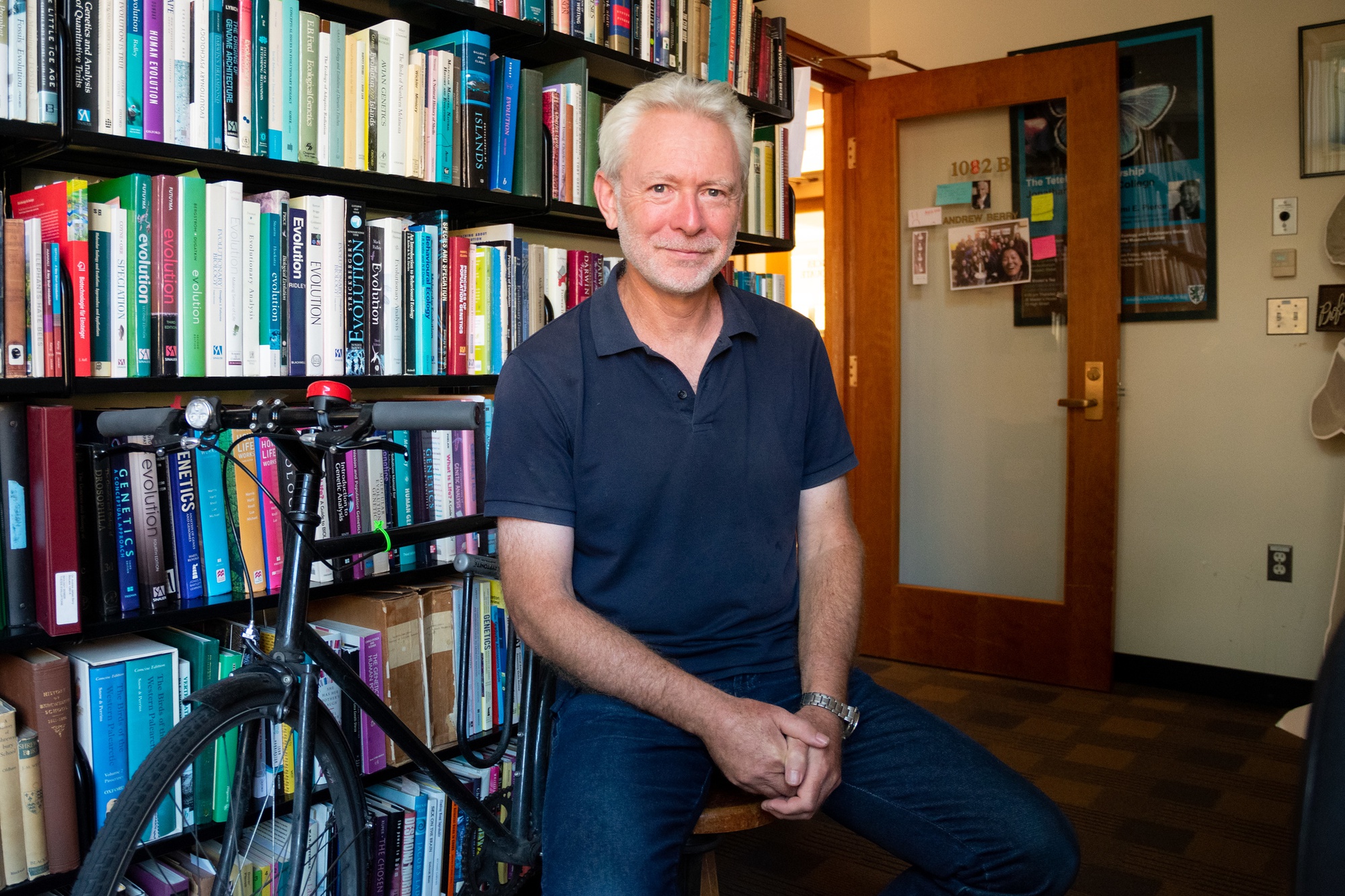 Andrew J. Berry earned an undergraduate degree in zoology from Oxford University and a doctorate in evolutionary genetics from Princeton before coming to Harvard as a Junior Fellow. He is now a Lecturer in Organismal and Evolutionary Biology and the Chief Assistant Tutor in Integrative Biology.

This interview has been edited for clarity.

FM: So what brought you to evolutionary genetics?

AJB: All kinds of factors – it was kind of a conspiracy, actually. My dad was that university scientist. My mother was a doctor. So there was biology at home. In typical, if appalling, British bourgeois fashion, I was taken out of my birthplace and thrown into boarding school at the age of 13. The school, oddly enough, was Charles Darwin High School, so I studied science at Darwin. buildings. I had a really inspiring biology teacher at the time. He had made a point of becoming an expert in Darwinian thought. You could say [it was] strangely overdetermined; I had to become an evolutionary biologist of sorts.

FM: What is the most fascinating evolutionary innovation that you have studied or come across?

AJB: Atavisms, which are traits that are not present in a contemporary organism but were present in that organism’s family tree. Here’s a famous example: A whale off Vancouver in the North Pacific had two symmetrical appendages protruding from its rear sides – the legs. What happened? There was that famous moment about 375 million years ago when [our ancestors] out of the water, and we had tetrapods and eventually amphibians, reptiles and mammals. Then you have a bunch of lines that have decided to go back to the water. Atavism is something that could be a mutation, could be a developmental abnormality, [in which] the signal that suppresses hindlimb production failed.

FM: Why are questions of evolution important to you?

AJB: The evolutionary process is the most alluring, interesting, and important feature of all biology, because it touches on everything. You might be a cancer biologist interested in knowing why the cell cycle has been corrupted by particular mutations. But where does this corrupted cell cycle come from? He evolved. And what do cancers do? They evolve as you try to hit them with drugs. [Studying evolution] is, in a sense, an excuse to study everything.

FM: Your early research focused on adaptive evolution within a particular chromosome of the Drosophila genome – what did this work find?

AJB: We were interested in how we [could] identify the action of positive Darwinian natural selection in DNA. Most natural selections are negative: a new mutation arises, it breaks something that works, [selection] just eliminated it. But what about innovation? It’s positive natural selection, where a new mutation appears and actually makes the bird fly faster or the whale swim faster. How to identify these events? Much of the change is random; they don’t matter. You cannot formally distinguish them between random and adaptive evolution, except in situations where you have a lack of recombination in that region of DNA. Suppose I have this new beneficial mutation on it. It’s not just the beneficial mutation that will go 100% [in the population]; it’s the whole piece of chromosome. In fruit flies, chromosome four very rarely undergoes recombination, so it was a good candidate to look for evidence of this “selective scanning.”

Lo and behold, we looked at a particular gene and [found] there were no mutational differences in this huge piece of DNA across the entire species of Drosophila melanogaster. This tells you that there must have been a selective scan for an adaptive mutation somewhere on that chromosome. Now [these tools for detecting selective sweeps] are very standard in human genetics.

FM: You arrived at Harvard as a researcher, but today you devote your time to teaching. Why did you make this transition?

AJB: As a postdoc, I met a lot of interesting people and had a lot of good conversations. But I’ve never been so excited to be in a molecular biology lab. The question was [whether] there was a way to get involved in science without spending all day pipetting. And it’s pretty addictive to teach, especially to teach at Harvard, because you get to walk into a room with a lot of smart people who have to listen to you. It’s an opportunity to try to convince other people that what you think is important is important.

FM: You help teach one of the largest classes on campus — Life sciences 1b. What are the special rewards and challenges that come with teaching on this scale?

AJB: One challenge is that it’s somehow depressingly impersonal. The second thing is that it’s not my class. [The class] is a prerequisite for pretty much every life science, so there’s a committee that basically decides the content, and my job is to execute it. It’s not super sexy. The big plus point though [is that] the first years are qualitatively different from the upper classes. The first years did not have the enthusiasm expelled from them. They’re just brilliantly engaged and excited and fun to talk to.

FM: What sort of questions get you out of bed in the morning these days?

AJB: It’s my job to stay on top of what’s happening in science. I can’t just recycle lectures from 20 years ago, so what gets me out of bed is the opportunity to figure out what I should add in the next iteration of the X, Y, or Z course. That, and the prospect of breakfast.

FM: How would you say your approach to teaching has evolved over time?

AJB: I became more sensitive to the fact that I have a great virtue as a teacher, which is that I am rather stupid. No, seriously, I’m not just on your level, I’m probably slightly below. So if it’s a complicated idea, I might have a hard time understanding it. But because I have trouble understanding it, that means I have to unbox it and present it in a way that a complete jerk – I’m looking at you, Andrew Berry – can understand it, which turns out to be pretty good for introductory courses.

FM: You like to integrate the history of science into your lessons. What value do you think comes from learning about the people and stories behind the science?

AJB: I believe humans are wired to tell and hear stories. The problem with a lot of scientific teaching is that there is no story in it. There are all kinds of ways [storytelling] can work in class. If there’s a whole set of experiences that build on each other, it’s a great story arc.

The other way is to incorporate personal stories. We can just dive in and talk about Mendelian genetics, but it’s much more engaging if you can think of Brother Mendel. He tried to pass this exam that would qualify him to be a teacher and failed twice, which is already a wonderful and teachable moment, isn’t it? Some of the greatest scientific breakthroughs have been made by people who are sideways or by chance.

FM: You are particularly interested in the naturalist Alfred Russel Wallace. Tell me more about him. Why do you find it so compelling?

AJB: Wallace is someone who is somehow famous for not being famous. The reason Darwin published “The Origin of Species” is that he received this letter from this person 14 years younger than him who was collecting specimens in the rainforests of Southeast Asia. East: Wallace. Wallace sent Darwin a letter in which he basically described Darwin’s theory. Darwin panicked, and he and his senior colleagues saved face by having the two scientists co-publish a paper in 1858. Darwin then immediately released “The Origin of Species”, partly to establish his precedent – he worked on this idea for some time. long duration. When you google “evolution” what do you see? It’s that big luxurious front from Darwin. What happened to Wallace? You might think he was a one-hit wonder. No, he did all kinds of incredibly important science. He was an incredibly progressive thinker.

FM: What common misconception about evolution would you most like to dispel?

AJB: The premise that you either believe in evolution or you believe in God. What I want people to be comfortable with is that these are not formally incompatible worldviews. What they are are different worldviews that don’t really overlap. Science is observation, experimentation. Religion is accessible by faith. You have two different ways of seeing the world. They are both equally valid.

FM: Can you predict how the human genome might change over time?

AJB: Not really. Natural selection [depends on] the interaction between the environment and the genome. So if there are variations in the ability to run fast and there are a lot of lions in your neighborhood, then you will have a natural selection in favor of running fast. You might say, can we predict future environments? I would say no. It is very difficult to predict anything.

AJB: There are people who will tell you that natural selection does not occur in human populations. I would point out that the diseases that used to kill us no longer kill us. If I have type 1 diabetes, I am fully capable of having children and passing on my genes that probably predispose me to type 1 diabetes. And hello COVID. I bet COVID exerts a pretty large selective event. There is no doubt that evolution under natural selection is still ongoing. Where we’ll end up, I’ll let you find out.

FM: Have you noticed any interesting ways that Harvard students have “evolved” to survive this arguably harsh environment?

AJB: Well, no is the answer. It is in fact an unfortunate linguistic confusion. When, as an evolutionary biologist, I talk about adaptation, I’m talking about the Galapagos finches’ beaks being perfectly adapted to eat the right size of seeds and so on. But a neuroscientist, when he talks about adaptation, is talking about a plastic response of the body to adapt to the environment. There are tons of them among Harvard students. I mean, it’s an amazing social experiment we put on every year, bringing together a bunch of valedictorians. It’s a huge amount of social stress and friction, but the human mentality is such that it quickly adapts appropriately. We got all these bright people who could hang out [wrong] — and sometimes do, of course — but more often than not, we really pull ourselves together for the greater good.

FM: You deliver the annual Bulldog Roast for Harvard-Yale, but if you could roast Harvard instead, what would you say?
AJB: It would be a four hour roast just to talk about my.harvard, which is the worst IT infrastructure out there. It’s extraordinary that a great academic institution is brought to its knees at the start of every semester because my.harvard isn’t working. But the sad news is that we can make Harvard jokes and roast it, but it will never be as easy as roasting Yale, which is woefully inadequate on so many fronts.

— Saima S. Iqbal, the magazine’s associate editor, can be reached at [email protected] Follow her on Twitter @siqbal839.