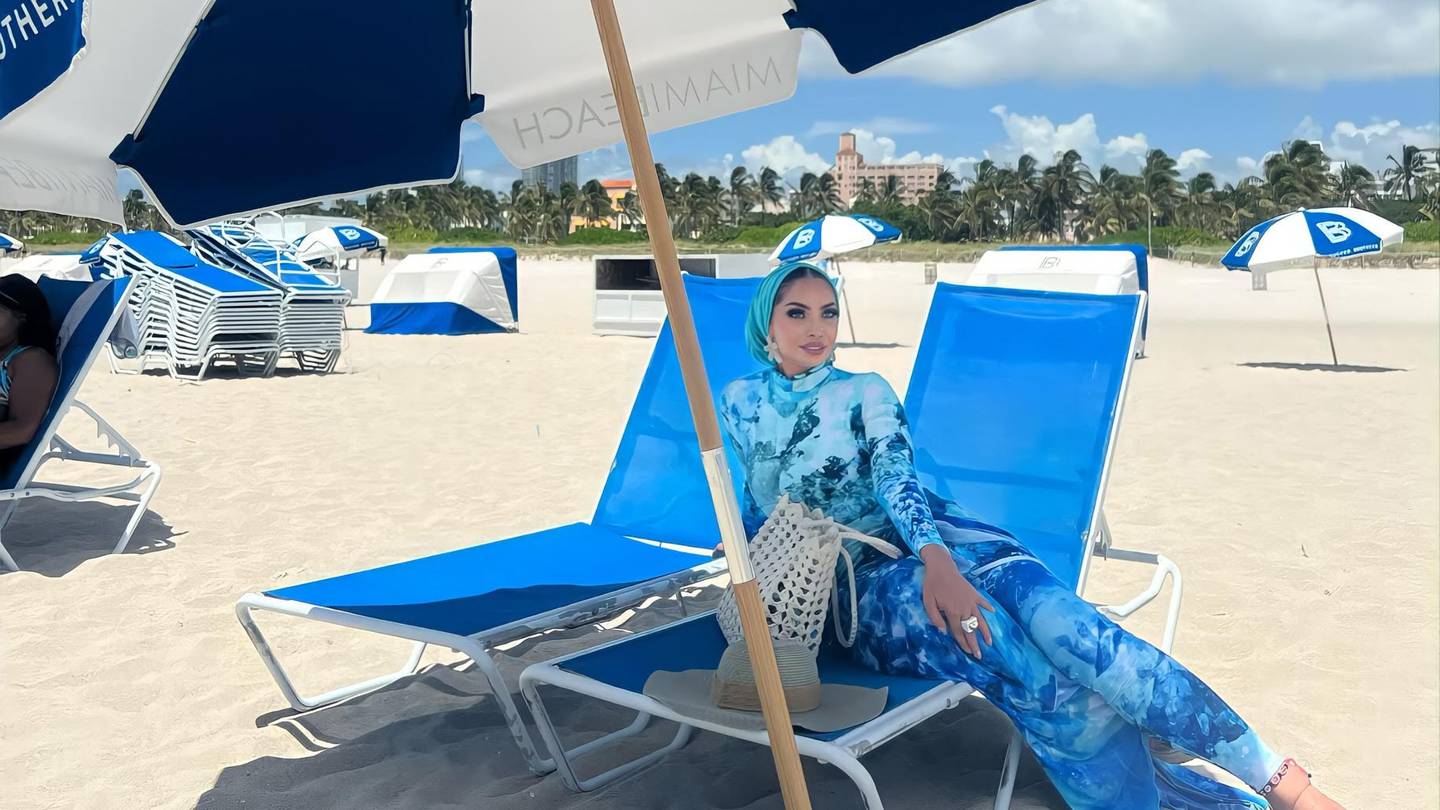 Once deemed stuffy and non-inclusive, beach resorts on Egypt’s northern coast are welcoming more and more women in traditional Islamic attire, thanks in part to a new line of swimwear.

The “swimwear for all” burkinis were launched in April by Egyptian fashion influencer Hadia Ghaleb, who lives in Dubai. They marry modesty with high fashion and sparked a quiet revolution.

For the first time in years, the summer holiday season is coming to an end without many reports of women wearing hijab being banned from swimming pools at hotels and resorts frequented by the country’s upper classes.

Lawyer Aya Elfardy, 34, lives in Dubai but spends her summer holidays in her home country of Egypt. She posted a photo of herself in a burkini for the first time on Instagram this year, as she felt more confident about her look.

“Although I have other burkinis that I have purchased from international brands, I have always felt uncomfortable wearing them because people [in upmarket areas] despises women who wear hijab… but Ghaleb’s collection made me more confident,” she said. The National.

“I knew everyone would say ‘wow,’ because this is Hadia Ghaleb’s trendy burkini,” she said.

Modest shoppers like Ms. Elfardy can find bright, colorful designs with names like Bubble Gum or Mermaid in a variety of styles, from pants and long-sleeved tops to matching hijabs and sarongs. For the wiser, there is an all-black offering.

Being on the cutting edge of burkini fashion comes at a price, however. Each Hadia Ghaleb costume costs around $200 – but it can include a free gift: social change.

Rana Beheiry, 34, an Egyptian who also lives in Dubai and has 43,000 followers on Instagram, said Ms Ghaleb’s line had made a difference to her summer vacation experience.

“When I put on Hadia’s burkini, I felt more accepted by those around me,” she added.

“Classism is becoming quite evident among Egyptians and it is particularly visible in upscale places, where people view veiled women as lower class,” she said.

Both women have been affected by the burkini ban in the past.

Ms Elfardy said in 2015 that she had tried to buy a chalet in one of Cairo’s north coast resorts, but then realized that the contract prohibited women from entering swimming pools while wearing burkinis.

In 2016, Ms Beheiry said she had been banned from using the pool at one of Gouna’s resorts.

Such incidents prompted the Ministry of Tourism to issue a memo in 2017, stressing that hotels or resorts are prohibited from banning veiled women from using the pool, as long as the burkini is in a swimsuit.

But complaints about the burkini ban persisted.

Those who oppose burkinis argue that they are unhygienic and unsanitary, claiming that they are not made of bathing suits. Another argument, said less publicly, is that since it is almost impossible for women to wear bikinis or even a one-piece swimsuit on public beaches in Egypt, they have the right to demand exclusivity in places where they pay to enjoy a swim.

Burkini supporters say they are futile excuses to hide what they describe as growing discrimination against veiled women among the upper class in a country with a majority Muslim population.

Eman Hussein, a 38-year-old teacher, who lives in Alexandria, said four years ago she was forced out of a swimming pool at a resort between Safaga and Hurghada on the Red Sea in the east from Egypt, while wearing an appropriate burkini she had purchased. from abroad.

“While talking to the hotel employee about this, another visitor entered the pool wearing short cotton clothes that were totally inappropriate for the pool,” she said. “At that point, I realized it wasn’t because of the material of the burkini, it was the fact that it covered my whole body.”

Some say the popularity of Ms Ghaleb’s line bolsters the argument that it was never about hygiene.

Speech therapist Fatma Farouq, 42, has a habit of phoning hotels before traveling to find out their rules on burkinis and avoid disappointment.

“A few years ago, I called a hotel in Ain El Sokhna [a popular seaside destination on the Gulf of Suez] to ask if burkinis were allowed and the answer was no.

But this year she said she was allowed to swim at the same hotel wearing her burkini, not Ms Ghaleb’s.

It is exactly this kind of discrimination that Ms Ghaleb hoped to help end.

“When I launched my brand, the first thing I thought was that there are many girls banned from the beach in France and unfortunately in many places in the Arab world and Europe”, she said. Crude Egypt in May.

Experts agree that classism has always been at the heart of the burkini controversy.

“The swimsuit is not only something we put on, but it is also a message,” said Dr. Taha Abu-Hussein, professor of sociology at Al-Azhar University and American University from Cairo. “A message that says I am in a higher status; I am richer. We don’t carry our wealth in a bag with us all the time; on the contrary, it is reflected in the form of possessions and that is what some people want to prove.

“The urge to buy things increases when a ‘famous person’ buys or wears a certain product, people then take him as a role model, even if they cannot afford it, to gain his social status and his privileges.”

Shortly after their release, Ms. Galeb’s swimwear sold out. despite what many consider an inflated price of 3,650 Egyptian pounds in a country where the average monthly income is 5,000 pounds.

Some believe, however, that the Ghaleb swimsuit fever is not only driven by a desire for upper-class assimilation, but also that the line is truly fashionable in contrast to traditional dark, plain burkinis.

“Hadia introduced the burkini to international standards, in a design that allows it to be used in multiple forms and in new colors resembling a work of art, so it really caught people’s admiration,” said fashion blogger Noura Alkholy.

However, not everyone fell in love with it.

“I don’t see Hadia’s swimsuit suitable for veiled women, as it reveals the details of your body,” Ms Hussein said.

This story was published in collaboration with Egab

The Razorbacks are fourth in the Carmel Cup