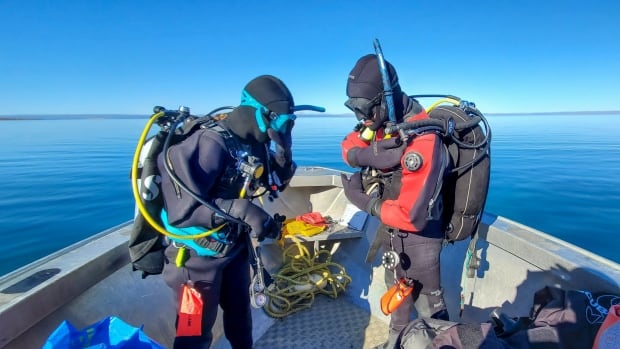 Divers wrap up an expedition in Cambridge Bay, Nunavut, after weeks of studying algal biodiversity.

This is an area that has rarely been studied.

Over the past few weeks, researchers have worked to track and understand the effects of climate change on algae along coastal waters in the western Canadian Arctic. They also hoped to map and study the ecology of arctic kelp forests in the region.

Dr. Amanda Savoie, who leads the project, spoke to CBC a few weeks into the trip.

“There’s kind of an idea that there aren’t really any kelp forests here and there isn’t as much seaweed. And so we’re kind of looking to see if that’s true,” Savoie said.

Savoie is a research scientist at the Ottawa Museum of Nature and director of the Center for Arctic Knowledge and Exploration.

Ocean temperatures play a big role in algae growth around the world, Savoie said. As waters warm, the distribution of different species of algae changes. The Arctic and Antarctica are expected to be the hardest hit, because once those waters warm, there will be nowhere colder for the algae to go.

“We know the species composition will change and Arctic kelp will have nowhere to go when the water gets too warm. But more kelp will come up from the south,” Savoie explained.

“We’re really trying to understand what’s going on right now so that if things change in the future, we’ll have a baseline to come back to for this area.”

She is joined in the research program by a team of scientists affiliated with the ArcticNet-funded project. ArcticKelp with Laval University and Fisheries and Oceans Canada. So far, the ArcticKelp project has studied and mapped kelp forests in the Eastern Arctic and this partnership will extend the knowledge to the Western Arctic.

Savoie traveled to Cambridge Bay this spring to meet with community members and the local hunters and trappers organization, where she learned that some community members are interested in seaweed as a food source. She said local knowledge was crucial in finding dive sites.

“We have a local guide who takes us scuba diving on his boat and without him this study wouldn’t happen. He’s so important to our work,” she said.

“I think people are interested in knowing what we find in the general marine environment around Cambridge Bay – if there is any potential for kelp harvesting in that area.”

Because the tides are smaller there, researchers have to dive to access the algae.

“We actually brought kelp for the elders to try…and they loved it. It was a really cool experience,” Savoie said.

John Lyall, their local guide in Cambridge Bay, regularly guides tourists and divers out on the water.

He said it creates an exchange of knowledge – he helps them, and in turn he sometimes finds new places to dive or learn more about the land.

“It’s really cool,” he said. “I’m just happy that they involve us ordinary people [as] guides.”

There are an estimated 175 known species of algae in the Canadian Arctic. The most recent taxonomic study dates back more than four decades from the work of museum researcher RKS Lee. Arctic specimens collected from Lee’s work in the 1960s and 1970s number in the hundreds and are housed in the museum’s National Herbarium of Canada in Gatineau, Quebec.

Savoie and his colleagues hope to add to this collection and will collect and identify algal species as well as DNA data.

“I’m going to sequence the things I collect from the museum to compare their DNA basically to other seed collections from the Arctic, Atlantic and Pacific,” she said.

Savoie said there is evidence of kelp, but scientists have yet to observe a true kelp forest. These habitats resemble tropical rainforests – hotspots for biodiversity, hosting other algae and providing food and shelter for fish and invertebrates.

“We found kelp, which is really exciting. So there’s definitely kelp here.”

The multi-year program began in August and ends on Tuesday. Savoie said she hopes to return next year.

“With this baseline, we will be able to compare and see the change. We don’t know what the Arctic will look like in 20 or 30 years, and I think it could be very different from what we see now. .”