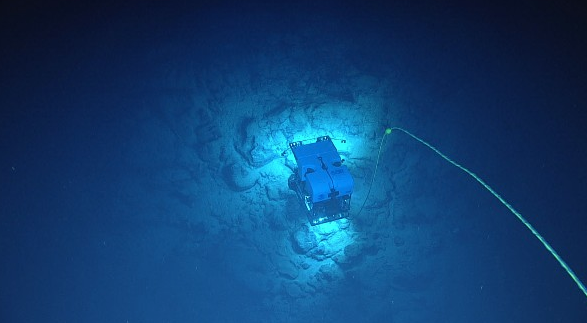 During a recent expedition on the National Oceanic and Atmospheric Administration ship Okeanos Explorer, an engineer ashore, more than 1,000 miles from the ship, successfully piloted a remotely operated vehicle (ROV) to explore the deep ocean. A first for NOAA Ocean Exploration and the Global Foundation for Ocean Exploration, this test of piloting an ROV from shore opens up new possibilities for deep sea exploration.

“Telepresence technology has been a game-changer for deep sea exploration,” NOAA officials said. “It changed who could participate, and when, how and from where they could do it. First, we used it to engage scientists from shore in real time, then we used it to invite the public to explore the depths of the ocean, and finally we used it to carry out mapping operations from the shore.

On March 1, 2022, during the NOAA Ocean Exploration ROV 2022 and Mapping Shakedown on the NOAA vessel Okeanos Explorerall the other objectives having been achieved, the engineers of the Global Foundation for Ocean Engineering (GFOE) have looked into a new use for telepresence: piloting a remotely operated vehicle (ROV) deep discoverer from the shore. From Rhode Island, more specifically, about 2,575 kilometers (1,600 miles) from the ROV in the depths of the Florida Straits.

During the test, an onshore GFOE engineer piloted the ROV for more than an hour of typical exploration activity over a boulder field in an uncharted canyon on the West Florida Plateau. The test required a coordinated effort between the pilot ashore and the onboard team of ROV engineers, officers and scientists to determine and control the vessel’s movements and the functions of the ROV’s camera and manipulator arm. necessary for imaging and geological sampling typically done during a dive.

“The ability to fly the ROV from a shore-based location is the result of a very talented team of engineers who worked together to overcome the multiple challenges necessary to make this possible,” said GFOE President Dave Lovalvo. “GFOE is excited about the development of this capability and continues to advance our technology in deep sea robotics.”

Previous efforts to improve telepresence capabilities on board Okeanos Explorer resulted in a significant reduction in communication delay between ship and shore. During the recent test, the shore engineer was able to initiate ROV movements and actions (e.g. imaging and sampling) from shore and see the ROV’s response in the live streamed video, taken 1,800 meters (5,906 feet) underwater, in just 1.25 seconds. This is remarkable given that signals must travel approximately 70,811 kilometers (44,000 miles) to a satellite in space and then back to Earth, twice (action input and video response).

“As the nation’s leader in ocean exploration, NOAA Ocean Exploration has a responsibility to push the boundaries of what is possible for deep sea exploration,” said Jeremy Weirich, director of NOAA Ocean Exploration. “Our future depends on the ocean, and new and evolving technologies are essential to help us better understand it, protect it and manage its many uses. The ability to fly an ROV from shore holds great promise and is just one of many technological advancements we have supported through partnerships with organizations like GFOE.

The March test was only the second test of this evolving capability, and the first the partners have tested in the deep ocean. The GFOE first tested its piloting capability ashore in Yellowstone National Park’s Yellowstone Lake in August 2021, a collaboration between NOAA’s Office of Marine and Aviation Operations and the GFOE. During the Yellowstone trials, GFOE piloted its ROV Yogi from shore in Rhode Island and also developed the ability to operate its research vessel Anne in autonomous mode, allowing the vessel to automatically follow Yogi during a dive.

Ocean exploration has relied on the use of ROVs for over 30 years. But the way NOAA operates them hasn’t changed much. For example, during ROV operations conducted by NOAA Ocean Exploration and GFOE on Okeanos Exploreron-board engineers, who are required to operate and maintain the ROV and related systems, typically make up a relatively large percentage of the science team.

After years of telepresence upgrades and technology and personnel development, the successful demonstration of onshore ROV piloting is a significant achievement that has broad implications for the future of deep sea exploration.

Piloting ROVs ashore provides opportunities for engineers ashore who might not be able to go to sea and for training new ROV engineers. It also provides redundancy in case of emergency and can potentially free up valuable berths to expand science teams in new directions.

NOAA Ocean Exploration is the only federal program dedicated to deep ocean exploration. By leading national efforts to explore the world’s oceans and making ocean exploration more accessible, NOAA Ocean Exploration fills gaps in basic understanding of America’s deep waters and seafloor, providing data, information and essential awareness about the deep ocean needed to sustain and accelerate the economy, health, and security of the United States.

The Global Foundation for Ocean Exploration (GFOE) is a not-for-profit foundation whose primary mission is to develop the capabilities and foster the relationships necessary to be a global presence in the world of ocean exploration. GFOE strives to empower the underwater science community with the tools and expertise to explore the deepest depths of the largest and deepest bodies of water on the planet and trains the workforce to ocean exploration.

Amazon to provide $10.6 million in loans for affordable housing in Nashville