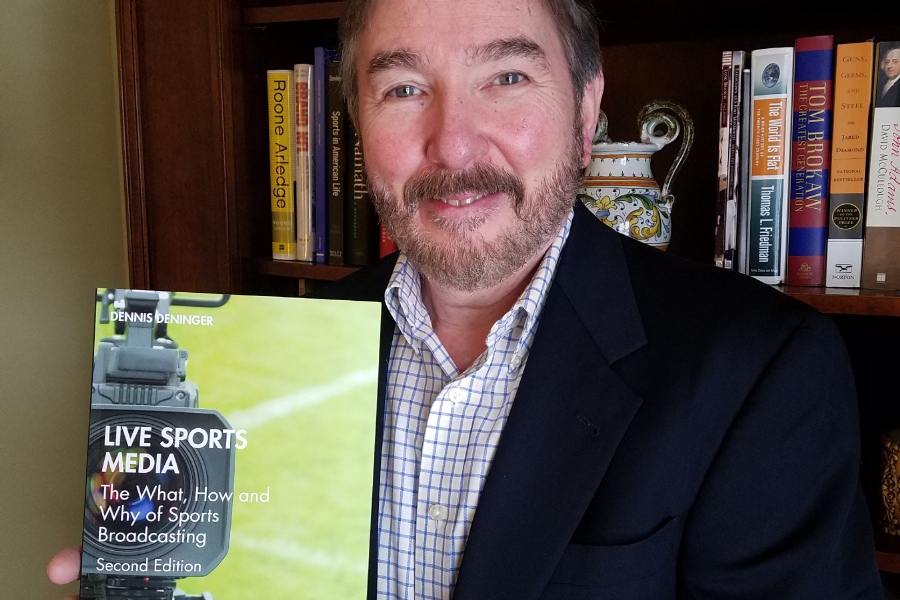 Over the past two years, school, college and professional sports have been turned upside down.

Seasons have been canceled or shortened. Fans were banned from attending games. In-season schedules have been modified due to positive COVID-19 tests. Athletes and coaches had to adapt to an ever-changing landscape that offered little consistency.

It seems like a really good time to dive deep into the world of sports media.

That’s exactly what Dennis Deninger of Cheshire has done with his new book, “Live Sports Media: The What, How, And Why of Sports Media”. An update of Deninger’s other work, “Sports on Television,” published a decade ago, this book takes an intimate look at how everything from the pandemic to live-streaming services to the changing demographics of the sports audience, has impacted the sports media industry, and how this industry is likely to continue to change in the years to come.

And he received recognition from many media personalities.

“Dennis Deninger’s combination of extensive sports television production experience and decades as a professor at Syracuse University’s prestigious Newhouse School makes this comprehensive look at broadcast sports particularly believable,” said Bob. Costas, a former NBC sportscaster who currently hosts the HBO show “Back on the Record with Bob Costas. It’s one of the many accolades Deninger has received from sports media personalities and executives.

“It’s amazing how much everything has changed,” said Deninger, who spent years at ESPN as a producer and is now a television, film and radio professor at the Newhouse School of Public Communication in the UK. Syracuse University. “Just 10 years ago you didn’t have all these streaming services. Now they’re a (major force) in sports media.

Deninger’s first book was a comprehensive look at the sports media of the time, providing readers with an insight into the history of sports on television as well as a behind-the-scenes look into the production of a sports broadcast. “Live Sports Media” takes a similar approach, giving the reader the full breadth of what’s been happening in the world of sports over the past decade.

The idea of ​​an update was first raised by Deninger editor Routledge Taylor and Francis Group in the summer of 2020. Recognizing everything that had happened since 2010, when “Sports on Television” had been in print, and considering Deninger suddenly found himself homeschooling via Zoom, the award-winning producer and executive was determined to push the project forward.

“I kind of took it on as my second full-time job,” he admitted with a laugh.

What Deninger did not expect was that circumstances would change dramatically as he began to write his book.

At the start of the pandemic, the NBA season was paused in March 2020, only to resume later that summer. The NCAA basketball tournament has been canceled. High school sports seasons have also been canceled and college fall seasons have been threatened.

“The (Major League Baseball) season, only 30% of the games were played,” he recalled, referring to MLB’s decision to only play one 60-game season, “but 100% of the fees (television rights) were due.”

Added to this are social upheavals that impact all sports. The Black Lives Matter movement was embraced by hundreds of athletes and eventually several professional teams. Social justice initiatives have become a huge storyline in the 2020 and 2021 seasons in professional and college sports, and politics has emerged as a pervasive feature in sports media discussions.

Then there was the influence of live streaming services, as sports viewers began to migrate from traditional networks and cable channels to other outlets.

In order to capture this tumultuous time, Deninger conducted more than 20 interviews with media professionals, from television executives and producers to on-air talent such as ESPN’s Chris Fowler and CBS’s Ian Eagle.

This not only allowed Deninger to paint an up-to-date picture of what’s happening in sports media today, but it also allowed him to be better informed about the subject he teaches.

“I can tell you that this process (of writing the book) made me a stronger teacher,” he said. “I am more up to date, more enlightened. I’ve always said that the more you know, the more questions you’ll ask.

Deninger views the book, first and foremost, as a guide for those looking to break into the industry in the years to come — the types of individuals most likely to take Deninger’s courses at Syracuse. However, he also thinks the book will be of interest to anyone fascinated by the sports media industry, as the opinions offered by notable personalities interviewed for the book, along with a few behind-the-scenes anecdotes should be enough to intrigue anyone. who calls himself a sports fan.

The book also offers predictions about the direction the media industry and the sports world in general will take in the coming years. That’s the subject of Deninger’s latest chapter, in which he tackles a world where fewer people in the coveted 18-24 age bracket are currently watching sports – Deninger mentioned how this year’s Super Bowl, despite generally positive ratings, has seen a precipitous drop in viewership among the younger demographic – as all professional sports leagues seek to become players on the global stage.

“This changing landscape makes things really exciting,” he said. “If you read the book, I hope you’ll never look at sports media the same way again.”

“Live Sports Media: The What, How and Why of Sports Broadcasting” is available by visiting www.routledge.com.