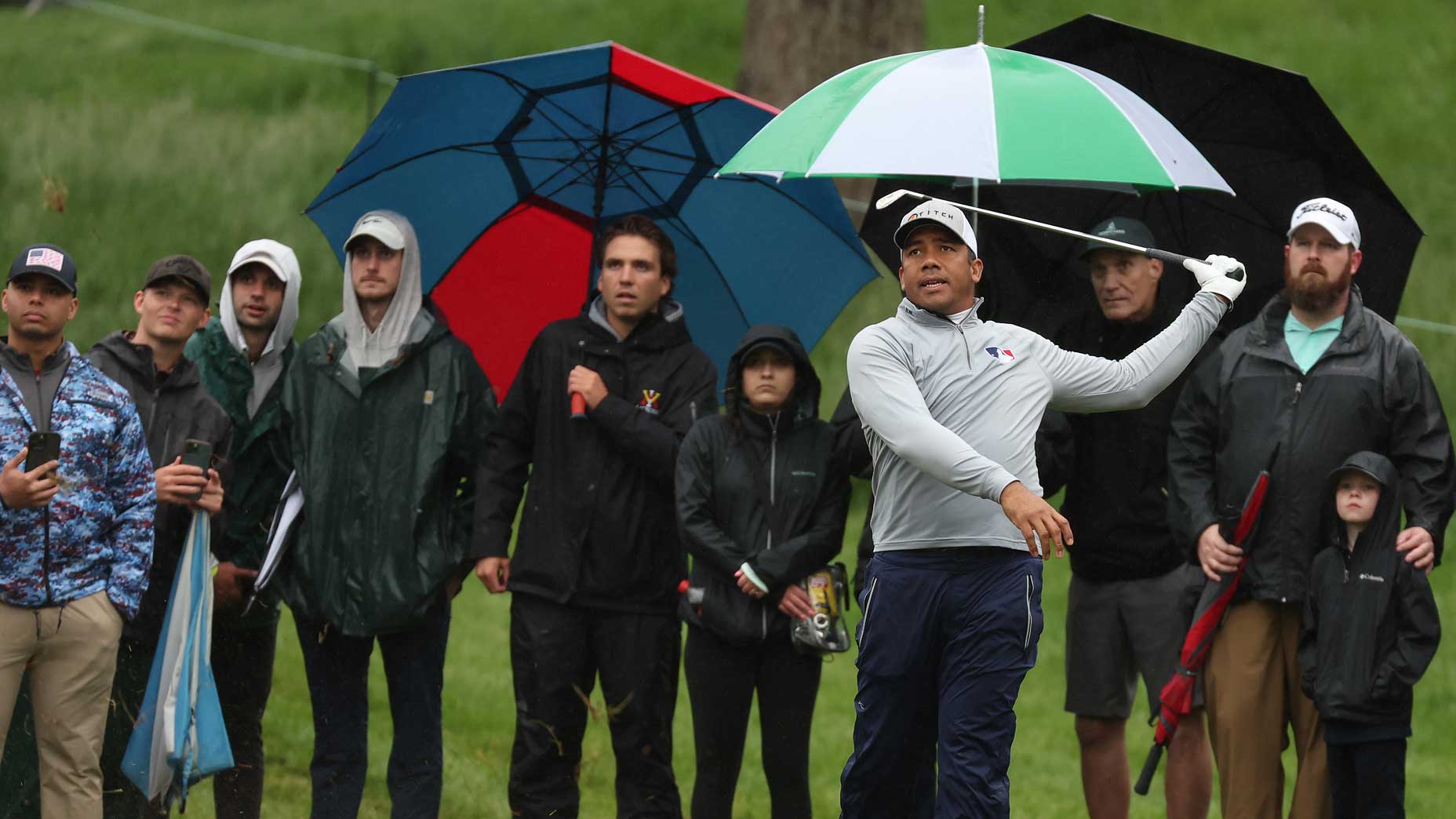 Jhonattan Vegas hits a shot Saturday on the 6th hole at TPC Potomac.

Jason Day rolled his eyes, then shook his head. He had just started the second half of his inning at TPC Potomac, when his glove got wet. Again. But he and caddy Luke Reardon had come prepared. Day ducked under his umbrella, which served as a makeshift clothesline, and picked up a cooler glove from the half-dozen or so that hung above him.

How tough were the conditions on Saturday just outside of Washington in the third round of the Wells Fargo Championship? Yes, even the rain gear had to work harder than usual.

Already Potomac was no pushover. But add the rain, the wind, the low temperatures and, well, what did you have there, Aniban Lahiri?

Let’s try to unpack the carnage.

How was it there?

If you were there, your wet hat, shirt, pants, socks and shoes can tell you, as can your icy hands. The Potomac has been covered in rain clouds for the past two days, and if the water doesn’t hit your head, you’ll set foot in it, because the course – although that’s not the fault of the workers tireless – was waterlogged.

Add to that temperatures in the 40s and a 15 mph wind, and you wouldn’t be at fault if you thought Thanksgiving was a few weeks away, not Memorial Day. Which made hitting a golf ball about as easy as hitting a frozen turkey.

Says Max Homa of playing partner Day: “On the 13th tee he hit a driver, and it looked like he hit him great, and where I thought he was going to land and where he landed , I was about 30 meters away. He was too. He came to talk about the brevity of his younger brother. It helped because there’s a bunker there that we’re trying not to go to, and I realized I wasn’t going to go near it.

Says Lahiri: “You fight everything — you fight your body, the elements, the water, the cold, the conditions. Yeah, it’s hard work, and you just have to grit your teeth and kind of grind it down.

How were the scores?

A tip to you, Keegan Bradley, Rory McIlroy, Cameron Young and Nick Taylor. You four, and only you four, played Potomac under par. Sixty-one others did not.

The damage done (and we’ll get to the day of the day in a second):

– Joel Dahmen, who was one headed shot away from the first round after a 64, shot a 76, which followed his 75 in the second round.

– Kevin Chappell started double, bogey, bogey, triple, double, par, bogey – for a total of 10 over par until seven. He finished with a 79.

– Michael Thompson tied his front nine 41 with a back nine 41.

“Just move, literally any way you can,” said Matthew Fitzpatrick, who shot 71. “You’re not really looking to birdie; you don’t hunt. That’s probably why I feel like I’m playing better in these conditions, because maybe I’m not as aggressive and I’m just trying to really move around and not try to chase a score or whatever whether it be. Yes, that’s the mentality I had today.

What happened to Jason Day?

Before diving into Day’s round, we must first say this: the man spoke after his round. Others, most certainly, would not have done so.

“Unfortunately I just didn’t have my stuff today,” he said. “I’m just trying to think. I made a lot of mistakes there and kicked into the penalty areas. Its good. I just have to get back to it tomorrow and try to find positives from the first two days before tomorrow’s round.

He summed it up well. Going into the day with a three shot lead, Day let him trail by seven. After starts at 1 and 2, he bogeyed 3; tripled 4 after hitting his tee shot in the water; bogey 5 after dropping another tee shot in the drink; buggy 9; doubled 10 after needing a penalty after his second shot; and doubled 15 and 16 – for a nine of 79.

Particularly, according to golf stats guru Justin Rayno 36-hole leader or co-leader has shot an 80 or worse in a Tour event since the 2007 Masters. There, Brett Wetterich shot an 83, and the other co-leader, Tim Clark, shot an 80.

How did Keegan Bradley take the lead?

Let’s try to conclude positively. As noted above, Bradley was one of four players to break par, and his three under 67s gave him a two-stroke advantage over Homa entering Sunday.

So… what’s the secret?

“Yeah, when conditions get like that, I find a sense of calm just because I’m kind of worried about other things, keeping my clubs dry and my bag dry,” Bradley said. “It kind of keeps me in the present. I did it today, and I just had a great time with my caddy Scotty, we just – we’re a good team, and we’ve done a lot of good things today.

Staying in the present was a theme. Cliche? Yes. But listen to the players. Especially Lahiri, who shot a 70 and is four behind, with Hahn.

“Again, a lot of clichés going around, but just thinking about the next shot because it’s hard to commit to shots, it’s hard to make decisions,” he said. “So you have to be very clear before you pull the trigger of exactly what you’re trying to do, and that’s almost the easy part because executing it is no joke.

“Like I said, you fight a lot of things, including how your body is going, including everything that’s going on. You just try to stay in the moment and find your ball and hit it and of trying to think, OK, where can I put it next Unless you have the perfect club and the perfect lie and all the stars line up, I don’t even know if you’re going to too many flags because the odds of you walking away dropping a few shots are very high you’re just trying to position yourself in places where you can get a legit look at the birdie but you want to be on the side where you don’t go not make a big number because it’s easy to do.

Nick Piastowski is an editor at Golf.com and Golf Magazine. In his role, he is responsible for editing, writing and developing stories in the golf space. And when he’s not writing about ways to hit the golf ball farther and straighter, the Milwaukee native is probably playing the game, hitting the ball left, right and short, and drinking a cold beer to clear his score. You can contact him about any of these topics – his stories, his game or his beers – at [email protected]