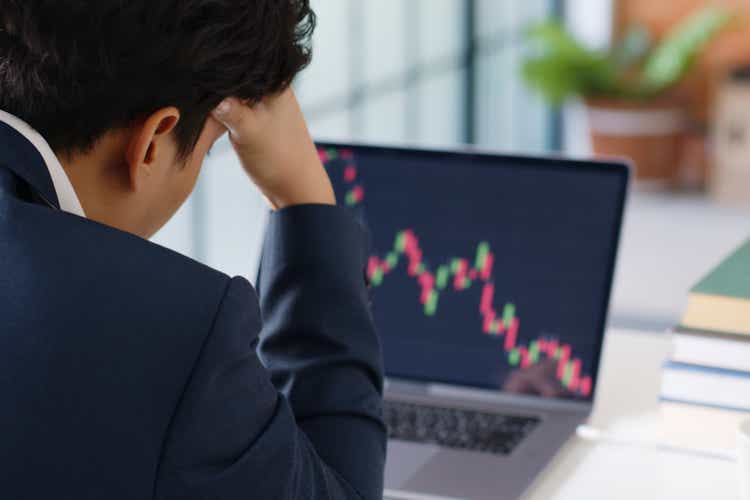 Learn from the past to predict the future of this market

We are going down, fast and negative rules in this market. I expect it to stay that way for several months at least. But at the same time, no one knows what the market will do in the short term and that includes me of course. This is just an opinion, nothing more, nothing less. In this article, I want to look at several factors that can give us an idea of ​​where we are today. Let’s dive into it.

Broken 8 weeks in a row

The S&P 500 (SPY) held up long enough against the Nasdaq (QQQ), but it also marked its seventh straight week in the red. For the Dow Jones (DIA), it is even the eighth week in a row and just to show you how bad it is, it hasn’t happened since 1932, during the dark days of the Great Depression. Imagine this: we survived a world war, terrorist attacks and a pandemic crisis, but the Dow never went down for eight straight weeks.

The Dow also had its worst week since March 2020, when the global economy came to a screeching halt. I think the market has gone too far in letting the air out now and is overcorrecting. But, of course, it still does, both up and down.

If you look at what investors do, it’s pretty predictable: they withdraw their money, sell their individual stocks, and invest some of their money in indices and ETFs.

Cash is now at the highest level since 9/11 more than 20 years ago.

I think it will pay off in time to do the exact opposite here and that is why I will be adding my DCA on steroids again in the coming week.

I also want to remind you of this forecast from a while ago:

The decimal places weren’t quite accurate for April, but the peak was fine in March so far. If indeed inflation were to come down quickly, combined with Fed hikes, that would be good for the economy.

Learn from the past

Will there be a recession? That seems to be the general consensus now, but my answer is I don’t know. Could there be a recession? Sure. It is certainly possible. But this excellent article by Ben Carlson shows what could happen. He says the period we live in is more like the post-war era than the dotcom bubble: a major international crisis followed by supply chain problems and sudden high inflation with high public debts on top of that. of that.

Here is the result on a graph:

Very rapid high inflation (almost 20%) followed by a decline in the following years, recession and deflation. Then the same pattern repeated itself over the next two decades, each time less vigorous but each time with a recession. So what do you think the stock market return would have been? Horrible, right? Well no. During this period, the stock market rose 900% or more than 16% CAGR. It was one of the best times to invest.

During this period, however, there were also several periods in which the S&P 500 fell significantly:

Is this a prediction that things will be the same and we will see a 900% bull market by 2045? Of course not, but it shows you that all the pessimistic stories you hear now don’t mean things can’t go well. In other words, it shows you that it is possible that we have a 900% run over the next two decades.

Another parallel with today is that unemployment was very low then. In 1953, it was the lowest on record.

I’ll leave the conclusion to Ben Carlson himself:

The point here is that recessions don’t always mean the world is coming to an end. Sometimes the US economy just needs a pit stop.

Every time inflation spikes, it doesn’t mean it has to be a repeat of the 1970s or the start of hyperinflation. Sometimes all it takes is a small recession to reset prices.

And every time the Fed tightens monetary policy, it doesn’t mean the economy is going to collapse. Sometimes interest rates need to rise from emergency levels to normalize the economy.

My prediction here is that if we see a recession (that’s a if but which is not improbable), it will be of short duration. This is because individuals and businesses have record levels of cash. Just look at deposits for consumers and businesses, for example.

As you can see, the pandemic has pushed up deposit and liquidity levels. There is a slight drop now for businesses, but it’s still at a much higher level than before the pandemic.

The pessimism about the economy is now more outspoken than at the bottom of the March 2020 Covid crash.

As you see, this level of pessimism is only comparable to the Great Financial Crisis (when the entire monetary system collapsed) and the dotcom crash. All the red circles on the chart have one thing in common: they represented excellent buying opportunities!

Learning from Buffett and Lynch on the macro

People who now act like the macro is the be-all and end-all of investing aren’t really focused on the long term. While this is certainly a short term factor, it is totally unpredictable in the long term. Here’s what Warren Buffett had to say about the Fed when Allen Greenspan was chairman:

If Fed Chairman Alan Greenspan whispered to me what his monetary policy would be over the next two years, I wouldn’t change a thing.

Peter Lynch also has some applicable quotes for this market:

Of course, that suddenly changed from March 2020, but I think we’re almost back to normal after a period that hasn’t been normal for years.

And there are more appropriate ones from Lynch. This one, for example:

And another quote from Lynch:

Alan Greenspan is an honest guy. He would tell you he can’t predict interest rates. It can tell you what short rates will do over the next six months. Try sticking it to what the long-term rate will be in three years. He’ll say, “I have no idea.” So how are you, the investor, supposed to forecast interest rates if the head of the Federal Reserve can’t?

When investors think of themselves as long-term oriented, they always think they are the ones who will hold onto their stocks, but most cannot. The reason is that they underestimate how painful it is to see so much red in your wallet when you also hear from everyone and your aunt that you were stupid and you will never get over it . This is completely normal and it takes a special type of investor to shrug off this kind of pessimism.

Of course, there will be terrible losers who will never return to their all-time high. But you have that with any style of investing. Losers are only part of the investing story, no matter how immune some claim they are. Show me someone with no losers and I’ll show you a liar.

Before I started my Potential Multibaggers series, in April 2017, I wrote an article about how they work. You can read it here. It’s about how you can have the seven worst stocks out of 10 and still beat the market convincingly over an 8-year period. I still think it’s relevant today and for the future. Peter Lynch has a great quote for this too:

If you’re lucky enough to have a golden egg in your wallet, it doesn’t matter if you have a few rotten ones.

And Lynch’s last quote in this article is also very appropriate for where we are now, I think:

Don’t get carried away with pessimism. This too will pass and this too will look like a great buying opportunity. Markets have always recovered and the best companies will thrive. It’s when most people are most negative about a certain type of action that you can make the biggest gains.

In the meantime, keep growing!