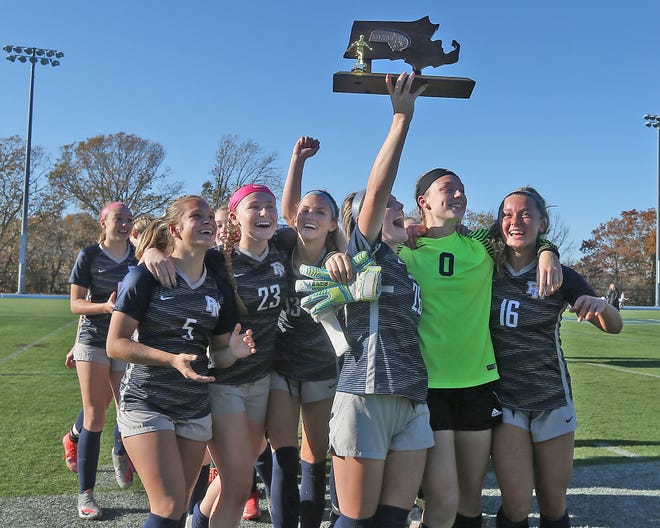 PLYMOUTH – Kylee Carafoli had a multitude of options in front of her when considering the next step in her educational journey.

Would the Plymouth North senior play college football or softball? Could she play both? Or would she play neither and just focus on her academic journey?

So many choices, but everything seems to be going well for Carafoli.

“I will attend the University of Vermont, where I will major in agriculture and life sciences. The school has a beautiful campus in Burlington, Vermont, and I love the vibe there,” said Carafoli, who will be able to work on a snowboard between classes.

“The success we’ve had with the soccer program, especially this season, really showed me how much I love soccer and how much I would miss it if I didn’t play,” Carafoli remarked. “The fact that the college I decided to attend had a Division I women’s soccer program made all the pieces fit together much better.”

Carafoli picked the right time to join the Catamounts. They had two senior graduates in net and two more junior goaltenders on the roster last season when they went 12-6-1, won the America East post-season tournament and made an appearance in the NCAA tournament, losing in the first round to Princeton. There are no other goaltenders in Carafoli’s incoming class and another candidate has already signed up who will be a senior in high school next year.

“I’m going to have to improve everything in my game to play at Division 1 level. One thing I know I need to improve is my voice on the pitch,” Carafoli said. “I have to communicate more with my teammates during the game and help be their eyes and ears on the pitch.”

Carafoli is leaving the Blue Eagle women’s soccer program on high. Plymouth North’s 15-6 record last fall was the sixth-best in program history as they made it all the way to the Division One Final Four before losing by one goal to Silver Lake.

The three-year-old starter is second on the list in career single-season shutouts (11 in 2019 and 2021) and third in career shutouts with 23. This season, Carafoli had a 0.95 goals-against average and was a Patriot League as well as an all-star selection from the Eastern Massachusetts Girls Soccer Coaches Association.

“We had an amazing season,” Carafoli said. “Many of the seniors on the team have played club soccer and high school soccer together since we were in elementary school, and it formed a really close bond between all of us. I think unity really has a lot to do with all the success we’ve had over the past few years.

Plymouth North head coach Eric Foley says the way Carafoli has improved his footwork and positioning over the three years has had a huge impact on his overall success in goal for the Eagles.

“Kylee is very athletic, so she can jump up to make saves by catching the ball over a group of players or tipping it out of bounds over the crossbar,” Foley said. “I think the best thing about Kylee is that she’s not just a one-dimensional athlete. She’s also a really good softball player and I think the work she does in a sport can be transferred and help him in the other sport.

Carafoli started at third base as a rookie. After seeing her second year canceled by COVID, she bounced back last year to move to shortstop as she helped Plymouth North win a share of the league title with Silver Lake and a place in the Patriot League All-Star Team. She will be captain of the softball team this season and will bat at the top of the batting order.

“I’m strong defensively and I think my goalkeeping training helps me because I can dive left or right to send a ball either side of me,” Carafoli said.

Carafoli is one of three Plymouth North football players to graduate in June who will play at Division I level in college. Megan Banzi is on her way to the University of Massachusetts-Lowell and Carly Schofield is committed to Central Connecticut State University.

Music and its power in my life – The Cavalier Daily