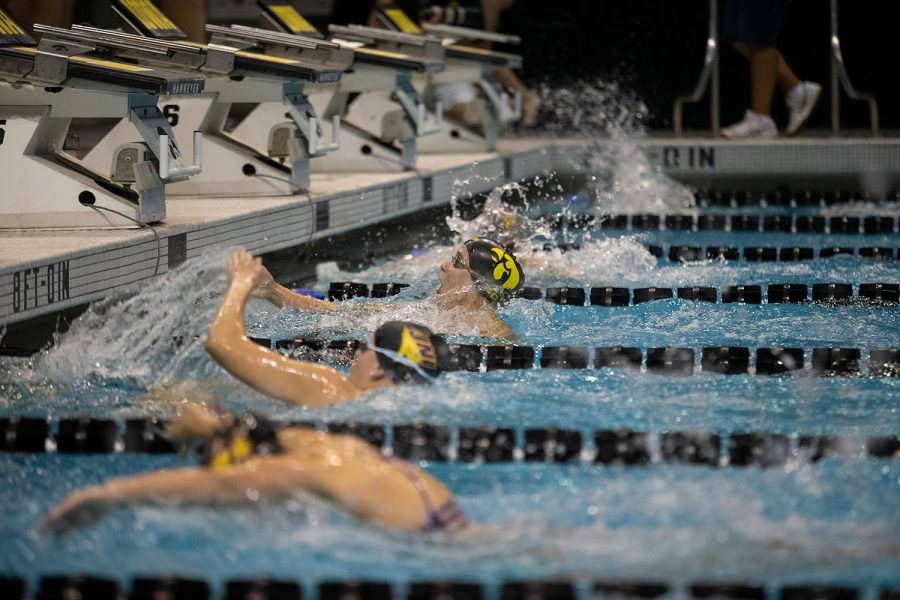 The Hawkeyes will travel to Minneapolis to compete in two competitions before the Big Ten Championships next month.

Iowa’s Zoe Pawloski completes the 100-yard butterfly against the University of Northern Iowa at the Campus Recreation and Wellness Center on Friday, October 1, 2021. Pawloski finished fifth with a time of 1:04 .73.

Iowa women’s swimming and diving will have two chances to enter the win column this weekend as the team heads to Minneapolis.

Iowa will face Minnesota and Northwestern at the Jean K. Freeman Aquatic Center. The competition will start on Friday afternoon and will continue until Saturday.

The Gophers have already beaten the Hawkeyes once this season in Iowa City. Minnesota beat Iowa, 156-104, on Oct. 8 in the Hawkeyes’ first Big Ten game of the 2021-22 season.

The Hawkeyes recently suffered a 204-87 loss to Illinois last Saturday – the first meeting since the athletes returned from the break. The loss dropped Iowa to 0-5 overall this season.

The Iowa swimmers enjoyed individual success in the pool, despite the Hawkeyes’ winless record.

Brooker said his biggest focus during his winter break was on self-improvement to help himself through the second half of the season.

“Coaches cultivated a type of environment where everyone trains, and they really tried to do practices so that we went away feeling better about our times,” Brooker said. “We kind of transitioned into events that we would actually swim in. So I think I definitely helped our confidence.

During the season, Pawloski worked on how long she can stay underwater.

“I really focused on my subs,” Pawloski said. “So I try to go 15 meters underwater every 25 [meters]. I’ve also worked out a lot with this little yellow device called a tempo trainer, and it helps me move my arms a lot faster and maintain my rhythm.

The Hawkeyes’ duels against Northwestern and Minnesota will be their last regular season game before heading to Madison, Wis., Feb. 16-19 for the Big Ten Championships.

Brooker said unity within the Hawkeyes program is the first step to securing a win.

“I think in the last week that we have, I think this team really wants to be a connected whole,” Brooker said. “We want to work as hard as possible to compete with Northwestern and Minnesota. Just keep morale high to get into the Big Ten [Championships], knowing that we can do anything that comes our way.

The Hawkeyes’ long-term goal for 2021-22 is to improve with an undersized roster. For the rest of the season, Pawloski said she’s focused on her personal bests.

“In this competition coming up this weekend, I’m definitely trying to get back to my fastest times,” Pawloski said. “And then to the Big Ten [Championships] I hope to get new PR.