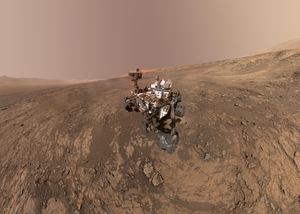 Launched in 2011, NASA’s Mars Science Laboratory (MSL) Curiosity Rover arrived on Mars in 2012 to explore Gale Crater, collecting rock, soil and air samples to help scientists characterize Mars’ geology and understand what the planet’s crust is made of.

As part of NASA’s long-term effort to explore the Red Planet using robots, Curiosity was designed to find out if Mars ever had the right environmental conditions to support microbial lifeforms. Early in its mission, Curiosity found evidence of ancient habitable environments on Mars, so scientists are continuing to explore the rock records using the advanced instruments aboard the rover.

Even before he joined NAU Department of Astronomy and Planetary Sciences in 2016, Christopher Edwards was already a participating scientist on the MSL team, funded by a $470,000 grant. In addition to funding his research, the grant enabled him to build the Mars Rover Operations and Analysis Laboratory on NAU’s Flagstaff campus, where faculty researchers and students use sophisticated equipment to help command the day-to-day activities of the Mars Rover. rover.

Now, after Associate Professor Edwards spent more than five years producing successful results on MSL, NASA has re-selected him as a participating scientist, awarding him $325,000 for the next three years. He and his team, all members of the Planetary Instrumentation Experimentation and Exploration Laboratory (PIXEL), will use this opportunity to continue working on rover operations while expanding their geological research.

“I am very pleased that we can continue to be involved in this flagship NASA mission,” Edwards said. “This is a great opportunity for our group to stay engaged in the exciting science of Curiosity. I anticipate that this work will allow us to attract additional funds for related research in the future, and when that happens, we can provide more opportunities for our students.

The team’s initial goal was to study the geological history of the sedimentary rocks of Gale Crater using ground-based imagery and thermal infrared measurements collected by the rover. While studying this data, they encountered many different types of sediment, from sand dunes to solid rock. Although they are all common on Mars, determining their geological origin and history remains a major challenge.

For the second of the project, the team will link data from the rover, including high-resolution imagery, thermal infrared data as well as ground temperature sensors, to orbital data collected by the Mars Odyssey Orbiter spacecraft, to better understand how different types of rocks on Mars formed. They will also compare the data to measurements collected here on Earth, at sites that serve as analogs to Mars.

“Basically, we’re trying to figure out how well we could relate the orbital data that covers almost all of Mars with the ground-based thermal infrared images and data,” Edwards said.

Using very high-resolution images available from around the world – in which one pixel represents an area the size of a football field – they study individual grains of sand to show how well these microscopic images match to the rover’s thermal data, and then, finally, to the orbital data.

“We propose in this second project to take what we’ve learned about our ability to reliably verify this data and extend it to more complicated surfaces,” Edwards said. “Ultimately, we will link the geological and depositional history of these thermal imaging units to orbital datasets, improving our understanding of past depositional conditions on Mars.”

Postdoctoral Research Fellow Valerie Paid focuses on the geochemistry of the rocks in Gale Crater and conducting operations – operating the Rover and deciding where it will go.

“I’m looking at the composition and mineralogy of volcanic and sedimentary rocks in Gale Crater,” Payre said. “My overall goal is to understand where minerals and volcanic rocks come from and how they might have formed. Using visible and near-infrared orbital spectroscopy, I hope to detect various volcanic rocks in the oldest terrains of Mars. , including silica-rich rocks and feldspar-rich terrains like those analyzed in Gale Crater.

“I am very excited to continue the adventure as part of the MSL team to better understand the geological processes that have shaped and formed the sedimentary rocks as we climb up Mount Sharp. I can’t wait to see how far we can use the volcanic minerals contained in the sedimentary rocks to limit the magmatic processes that have occurred near Gale Crater, especially as we finally reach the sulphate-bearing unit!

PhD candidate by Ari Koeppel the research focuses on the surface-related aspects of the project. He uses analog sites on Earth, for example at Sunset Crater, to improve the interpretation of surface temperatures on Mars.

“I use drone data combined with data from weather stations to study the daily temperature cycle of a range of different types of rocks and sediments that are also present on Mars,” Koeppel said. “We hope this work will produce a model that will allow us to make accurate geological interpretations using temperature data from Mars satellites and rovers to better understand things like water abundance, ice and past habitability. We can then use MSL data in the field to confirm the effectiveness of the model and adjust it if necessary. This is a particularly exciting time to use MSL data as ground truth for our model, as the rover is just beginning to explore an enigmatic region of Gale Crater that hosts a layered sulfate deposit, which may be remnants of ancient lakes or springs.

PhD candidate Aaron Weintraub studies paleobedforms and focuses on the orbital side of the project. Although they resemble sand dunes, the forms of paleo-layers have some of the same characteristics as solid rock.

“My role on the MSL team is to collect data from the rover as it traverses the surface of the Greenheugh Pediment, a prime example of paleobedforms on Mars,” Weintraub said. “The data will allow me to perform what we call a ground truth, where the incredibly high-resolution rover instruments can verify the accuracy of our results from orbiting spacecraft. This ground truth will help limit and improve the orbital methodology that we use to study these mysterious features anywhere on Mars I will use them on the spot rover observations to characterize the thermophysical and mineralogical properties of these bedforms, and my hope is to determine if this site is a true paleobedform.

“Although my work in this phase is only a small facet of a much larger picture, it still helps to fit into the story of life on Mars and the evolution of planetary surfaces. By understanding how these unique features form and remain preserved, we can understand the environmental conditions present throughout their lifetime.This is important because it will help us understand whether the conditions necessary to sustain life were long-lived, transient, or I am thrilled to be part of such an impactful mission and hope that my contributions will help advance our understanding of the Red Planet.

Northern Arizona University is a top research institution providing exceptional educational opportunities in Arizona and beyond. NAU provides a student-centered experience for its nearly 30,000 students in Flagstaff, statewide, and online through rigorous academic programs in a supportive, inclusive, and diverse environment. Dedicated, world-class faculty help ensure that students achieve academic excellence, experience personal growth, have meaningful research opportunities, and are positioned for personal and professional success.