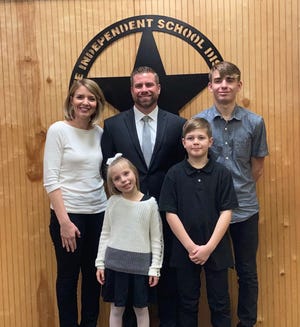 HOWE — Lance Bryan knew exactly what he was getting into when he applied to be Howe’s head football coach since he spent the past two years plotting against the Bulldogs for out-of-district competition.

“One of the biggest things I noticed early on – we were Homecoming two years ago – just the amount of community support I saw, there’s something to be said when a community supports his team,” he said. “And I know those are tough years, but the community was still going strong and to me, that was saying a lot. I thought there were pieces that were definitely there that could win games.

The program preview led to a deeper dive – on both sides – and Howe hired Bryan to be his head football coach and athletic director.

He replaces Bill Jehling, who resigned after going 6-34 in four seasons.

“I’ve been working towards this all my career,” he said. “I was just waiting for my turn to perform my whole program.”

The Gainesville native has spent the past three seasons as defensive coordinator at Sanger, which has reached the playoffs the past two years.

Howe Superintendent Kevin Wilson said the district received 125 applicants and conducted two rounds of interviews before Bryan was hired. His two-year contract received a unanimous 7-0 vote by the school board.

This will be the first head coaching job for Bryan, who takes over a team entering the 2022 season after losing 22 straight games and a 16-game losing streak in the district.

“You can reverse a program quickly if you do it right,” Bryan said. “I know the formula for success is embedded in the culture. Building a culture is the most important thing to maintaining success.

Prior to taking charge of Sanger’s defense, Bryan was DC a few times. He was at S&S for the 2018 season, spent two years leading that side of the ball at 6A Baytown Sterling and led that unit at Hutto from 2012-15, helping the Hippos to a Region 5A final in 2014.

He served as special teams coordinator at Jasper in 2011 and began his journey through the high school ranks as an assistant at Carthage in 2010 during a 3A Division II state championship season.

“I’ve taken stuff from everyone I’ve worked for because I’ve had the privilege of working for a lot of accomplished guys and all of them have elements that I’ve tried to take and use and mold then to mix with my own stuff and create my own culture, journey and program,” Bryan said.

Bryan, who played for Hardin-Simmons before being a graduate assistant for his alma mater from 2008 to 2009, now also has a global outlook with the added responsibility of athletic director.

“There’s no sport where being stronger and faster doesn’t translate to better athletes, and that’s strength and conditioning, powerlifting, and track. These programs train athletes in every other sports, whatever that is,” Bryan said. “One of the most important things is that I’m going to make sure I surround myself with like-minded people. They need to coach in a positive way. Go all-in for Howe. They must buy into the vision we are selling.

The Bulldogs are coming off their second straight 0-10 season that included six 5-3A(I) district losses each year. Prior to 2020, the only other winless campaign in school history was an 0-9-1 mark in 1964.

While Howe was again winless last fall, the Bulldogs were more competitive than in 2020, when injuries ravaged the roster and they scored 10 or fewer points in seven of nine games played on the field – a forfeit took place for the season finale due to COVID-19. The best opportunity for victory came in a 31-29 loss to Bonham on a dying-out field goal. All other games were decided by at least 23 points.

Jehling had 3-7 straight seasons to open his tenure at Howe, which was an improvement from the program’s 1-9 mark in 2017 before his arrival, which was a step back from a half. -regional final in 2016.