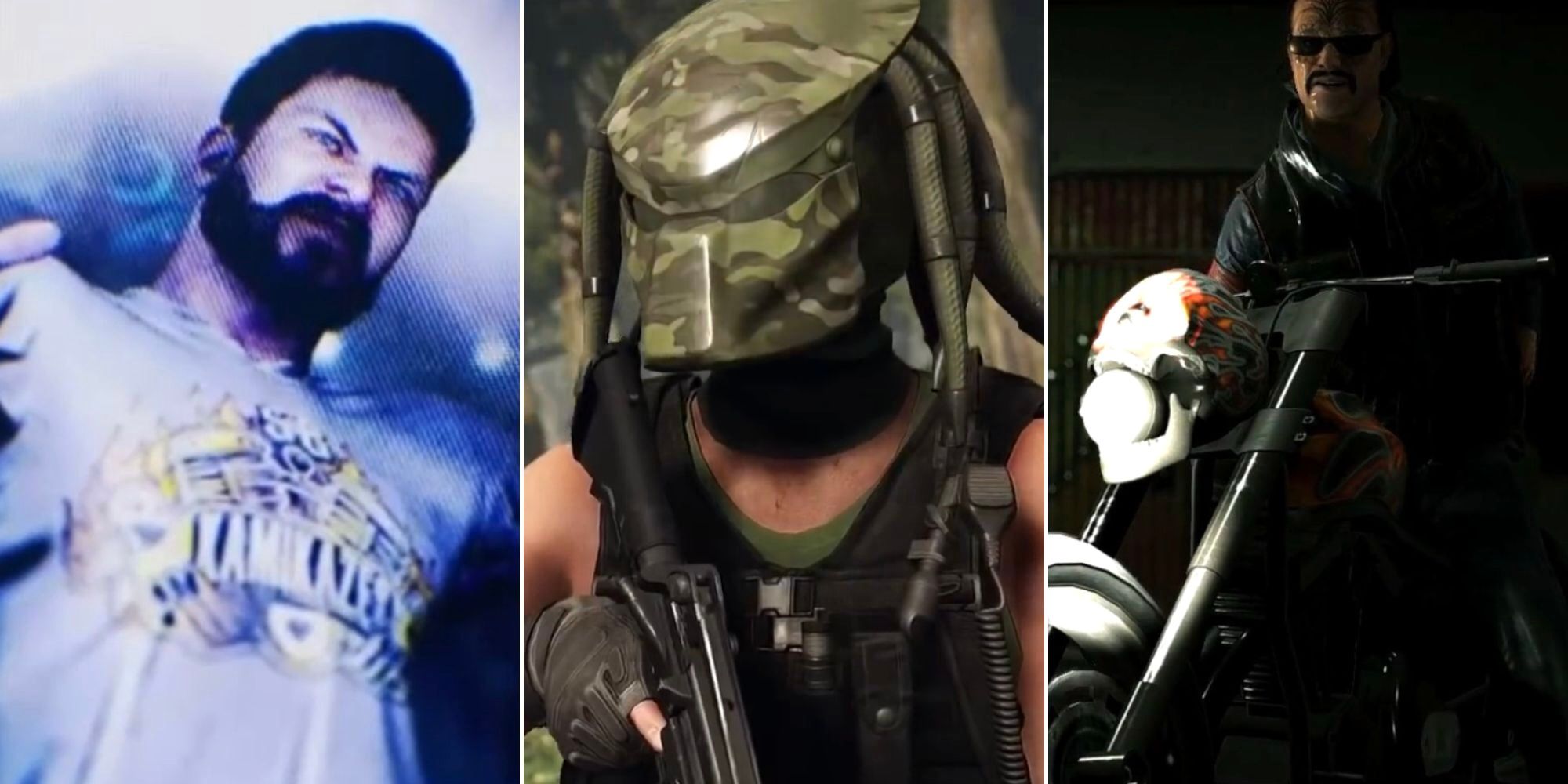 Boss fights are an unspoken rule of video games, something almost everyone has, even if it’s not portrayed in the typical sense. In God of War, these are large scale. Gods fighting gods, destroying their environment without caring about the world. In JRPGs such as Persona, Final Fantasy, the Tales Of series, and Chrono Trigger, combat typically occurs turn-based, often taking upwards of 30 minutes.

RELATED: The Most Unique Boss Fights Ever

Much of the gameplay relies on these fights; without them, the experience would not be the same. In Ghost Recon Wildlands, it’s not as simple as firing bullets at the enemy until they succumb to their wounds. That’s why, instead, we’ll include the entire mission leading up to this fight in our ranking.

Eddie’s story is perhaps the strangest in Wildlands. While the show has never been one to stray away from quirky humor and absurd moments, Eddie Escovado takes that notion even further. The mission begins with the flight of a plane which you will then use to recover Eddie. You’ll keep flying until you both dive out of the plane, where a cutscene will soon occur.

Eddie says a few colorful parting words, falling to the ground after refusing to fire his parachute. The mission then ends. The cutscene is pretty good, but due to how plain and simple everything else is, it earns its rightful place at the bottom.

Going up against Luis Rocha is a fun time. Unfortunately, this is no different from standard quests. With Rocha being an Underboss and one of the highest placed, you would expect something a little different. It goes a bit to show how this is an undercover sortie taking place in a wide area that takes you through a slew of enemies. However, no story pacing is changed to revitalize this concept.

The main problem is that it’s a bit too similar, which makes the fight unforgettable compared to others in the game.

Another of the bosses you don’t kill, El Sueno, is the person you’ve been working with the whole time. He is the final boss (excluding all DLC) and is just as ruthless and callous as rumors have it. During this mission you will shoot enemies, hide behind some ruined walls, and race against the clock in a ten-minute countdown, typically seen in other action plays similar to this one.

RELATED: Times You Beat The Boss, But A Cutscene Took All The Credit

Once you get to El Sueno, all the work your team has put into this cause is rewarded, even if it ends with an ally killing him before he can pay for his crimes.

Rey’s boss is somewhat similar to Eddie’s, as he takes risks by doing something different. In Rey’s case, it works surprisingly well. Your objective is to chase him in a bike race to kill him or at least interrogate him once caught. And just like most other fights in Wildlands, the same thing happens; the person you are chasing dies before you learn anything of note.

Indeed, once he arrives at Rey and close enough to speak to him, he will set himself on fire in a final act of blazing glory.

Tonio is about as selfish as they come to challenge you to a race he believes you’ll never come close to winning. You, of course, beat this time, resulting in a very angry Tonio listing the many ways he will kill you then abuse your corpse by sawing off your head and eating instant oatmeal. The threat is original to say the least, proving to be a highlight of the disappointing Narco Road DLC of which this quest is a part.

The mission lasts about 5-10 minutes, so it’s a little shorter, but since your only goal is to beat Tonio’s time, the experience is poor.

Does anyone remember the Sinnerman mission from Cyberpunk 2077? The one where you help a death row inmate crucify himself live on TV? Well, if you do, the Cruzar mission in Wildlands is surprisingly similar in themes. Located in the northern compound, your team stumbles upon a village massacre where almost all of the inhabitants have been slaughtered. However, a singular person has been kept alive to let you know that Cruzar is waiting for you.

Upon arriving at his location, Cruzar remarks that you won’t be able to kill him, believing himself to be superior to the ordinary person. This falsified confidence gives you the upper hand, you manage to bring it down quickly.

Perhaps reminiscent of when Bigfoot San Andreas sightings were still floating around, the El Yeti quest follows a similar shot. Or at least you might think so until you take them apart and realize they’re nothing more than a person wearing snow camouflage gear. You can then loot this equipment.

Locating El Yeti is half the fun, even if it initially presents as a problem. First, you’ll want to look for bloody handprints on a snowy rock in the Inca Camina region. From there, you’ll take part in an intense shootout with the incredibly talented Sniper.

Ortega’s boss fight is more traditional than others in the game, with the opposition having the advantage of bringing you into their territory. You’ll start by reaching the arena where this fight is, where you’ll continue fighting Ortega’s men for five minutes. It can be exhausting, especially if you are not sufficiently prepared. It won’t be a fair fight. Ortega is going to throw everything at you, and you’ll have to adapt as best you can.

Thermal imaging is the go-to here, as red lighting makes it difficult to see your surroundings. After the five minutes are up, you are free to kill the rest of Ortega’s men.

The False Cult of El Tio is a challenge that can be completed solo or with a few buddies. Either way, it won’t be the easiest thing in the world, just like how to complete the challenge. It shows how you could imagine it as a mission where you eliminate this cult of El Tio, fighting your way through your opponents. It’s similar to standard story quests, but the added creepiness of this off-the-grid living cult is worth playing through.

El Tio is a god of the Underworld in Bolivian folklore and is especially important to miners, which is why the mission takes place primarily in a mining system. OAfter completing this fight, you will unlock the El Tio mask, which can be selected from the equip screen.

The Last Laugh is another Narco Road DLC quest, this time with your target being El Invisible, someone who has managed to fly under the radar so far. After locating a secret bunker, you’ll infiltrate the premises, but before you can move too far, rigged explosives will begin to go off.

Narrowly escaping the explosion, but now with El Invisible’s location, you can finally take it out. Or so you think. It turns out your target has eluded you once again although this time you have another lead, his name. The Narco Road DLC ends with the location of El Invisible (Jose Vargas) and his death.

Colonel Merlo is a boss fight in the Fallen Ghosts DLC. The quest starts with you finding Merlo’s pilot and interrogating them for Merlo’s location. Once this information is obtained, you can move towards your target. Like Ortega’s fight, this one is rather difficult, forcing you to use cover and vantage points as much as possible. Better to wait for the opportune moment than to attack impulsively.

After downing Merlo, your next move is to flee Bolivia, ideally with all your body parts intact. It’s the last stage of this quest that is the most entertaining to play because it feels like the stakes have been ratcheted up to the max.

The top spot couldn’t go to anyone other than The Predator. A staple of the horror genre across the medium and a terrifying foe to face. The Predator boss fight also rewards you with the best item in the game: the Predator Helmet.

The quest begins with a tracking operation where you hunt something through the woods. From then on, you are in control. But soon after, the Predator will pick up your scent and you will quickly fall prey. You can and will die plenty of times, and nearly every attack from this opponent will knock you down to zero health.

NEXT: The Best Horror Game Protagonists

Mike Doyle will coach the girls of Cathedral Prep