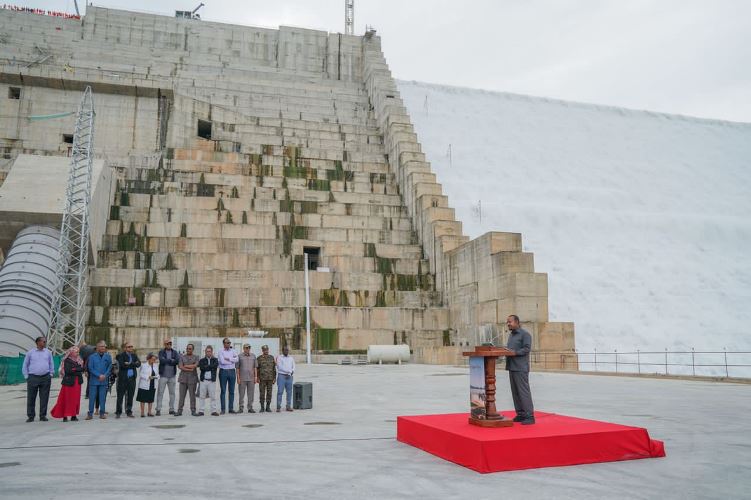 Ethiopia pledges to defend its airspace against foreign attack

Aug. 15, 2022 (NAIROBI) — Ethiopia says its air force is “capable of protecting and defending” the country’s airspace against any type of attack.

The statement released by the Commander-in-Chief of the Ethiopian Air Force comes shortly after the successful completion of the third cycle of filling the Grand Ethiopian Renaissance Dam (GERD), a move that would increase tensions with the downstream countries.

Earlier, Egypt said it had “received a message from the Ethiopian side on July 26 that Ethiopia will continue to fill the reservoir of the Renaissance Dam during the ongoing flood season.”

Last month, Egypt wrote to the UN Security Council “to register its objection and total rejection of Ethiopia’s pursuit of the unilateral filling of the Renaissance Dam without agreement”.

Tripartite talks between Ethiopia, Sudan and Egypt on the GERD have stalled since April 2021 after African Union (AU) mediation failed to broker an agreement.

With GERD talks stalled and Ethiopia unilaterally completing the filling of the third dam, there are growing fears that Egypt may resort to a military option.

In May, Egypt threatened to consider all its options if diplomatic efforts to resolve the GERD dispute failed.

Egypt’s foreign ministry said the country reserves the right guaranteed by the UN charter to take all necessary measures to ensure and protect its national security, including against any harm Ethiopia’s unilateral actions may cause to the country. ‘coming.

Military analysts say Egypt’s intention is to quickly improve its air capability by replacing its short-range F-16 fighters with Russian Su-35 fighter jets that have the capability to reach Ethiopian airspaces .

The United States threatened to enact sanctions if Cairo did not cancel the agreement with Russia.

Egypt’s threats are not new

Since the launch of the GERD in 2011, Egypt has repeatedly threatened to use the military option to stop the construction of the controversial Ethiopian dam project.

Addis Ababa, however, does not seem to be alarmed by repeated Egyptian threats and a possible airstrike against its $5 billion mega-dam project.

The Ethiopian Air Force said last Friday it was on high alert to defend the country.

“Our air force is capable of protecting and defending our airspace against any type of attack,” said Lieutenant General Yilma Merdassa, commander-in-chief of the Ethiopian air force. , to the official media.

The military official said the air force plans to develop the technology and produce a skilled workforce to become Africa’s premier air force by 2029/30.

Earlier, Cairo had warned the United Nations Security Council that Ethiopia’s intention to fulfill the GERD without an agreement between the states concerned “potentially threatens the welfare, well-being and existence of millions of Egyptian and Sudanese citizens”.

He said Ethiopia’s unilateral steps to fill the huge dam would cause “crises and conflicts and a serious threat to international peace and security”.

“Given the stalemate, it is difficult to rule out a military confrontation, but the geographical distance makes its feasibility very unlikely,” Metta-Alem Sinishaw, senior political analyst on Ethiopia and the Sudan region, told Sudan Tribune. East Africa..

“Despite its impressive military capabilities, Egypt could only intimidate but not destroy the GER.”

Metta-Alem, however, says Egypt will continue to mount special covert operations in Sudan to support nationalist groups in Ethiopia to undermine the progress of the dam.

“Egypt will intensify its diplomatic efforts to isolate Ethiopia and exploit internal contradictions and the difficult economic situation by supporting dissidents to undermine the federal government’s negotiating capacity and divert its attention from GERD,” he added. .

If Egypt preferred military action to thwart the construction of what would be Africa’s largest dam, the implications for regional stability would be far-reaching.

“If Egypt pursues the military option, it will most likely attack the GERD from Sudan, which will lead to massive flooding with disastrous consequences for Sudan,” Metta-Alem said.

“Retaliation by Ethiopia would turn the current border skirmish with Sudan into a full-fledged war and negatively affect the region” and global powers and regional actors will intervene to curb regional instability and the humanitarian crisis.

“Egypt’s military adventure is likely to sever its diplomatic relations with the African Union and shatter its regional geopolitical position as countries like Israel oppose a more assertive and emboldened Egypt,” Metta- Alem.

“The Ethiopian Air Force has built its manpower free from the influence of ‘politics and ethnic thought,’ the commander-in-chief said, adding that it has also completed the work of reform and restructuring of human resources, modern weapons and war infrastructure equipment with the slogan “A great air force for a great country.”

At present, the 93-year-old Ethiopian Air Force, which is the first in Africa, is able to protect Ethiopian airspace 24 hours a day and it is “ready for any duty”. . added the Ethiopian military official.

“Ethiopia’s statement on the readiness of its air force is more of a public opinion campaign aimed at portraying the administration’s tough stance on internal dissent and other non-state actors such as al-Shabab than Egypt, which has a much more technological capability,” Metta said. -Alem.

Meanwhile, Egypt replaced its Minister of Irrigation, Mohamed Abdel Aty, a day after Ethiopia announced the completion of the third filling of the GERD.

Hany Swailem was appointed minister of water resources and irrigation after Egypt’s parliament held an emergency session on Saturday.