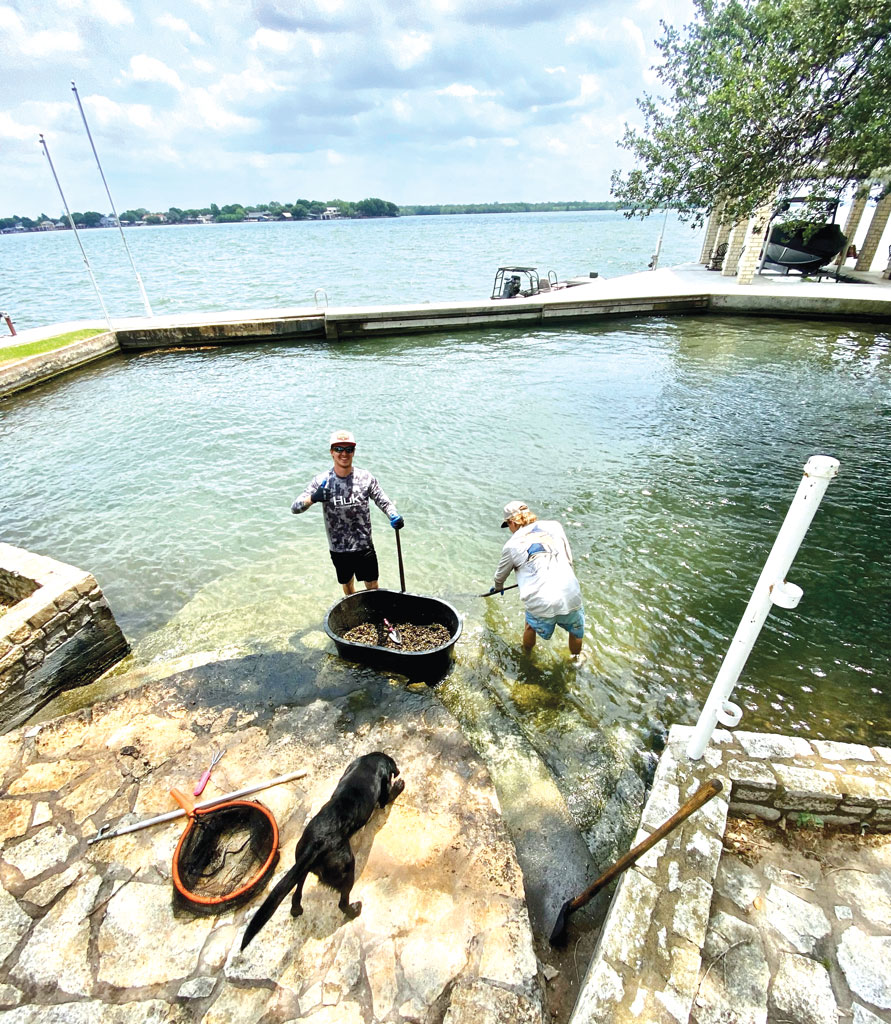 Committed muscle can scrape off, but not eradicate, invasive zebra mussels

Zebra mussel infestations in Highland lakes cause more than invasive clusters clogging water intake valves and filters. They also cause health and safety hazards on boats, docks and ladders, a problem producing new businesses aimed at controlling the damage these sharp and fast-growing nuisances can cause.

Hunter Delz of Kingsland has worked in and around Lake LBJ his entire life. He is one of a select group who can call themselves Kingsland natives, living on land that has been in his family for 75 years. Owner of HD Welding, which builds docks on the lake, he has struggled with zebra mussel problems for years.

He decided it was time to move some shellfish.

“It got bad,” Delz said. “They’ve been in every lake since Buchanan. They are even in the Llano river.

Zebra mussels came to the United States from Eurasia in the 1980s. Texas officials found the first zebra mussels in Lake Texoma in 2009. Since then, the invasive species have infested 28 lakes in the state, including Marble Falls, LBJ, Inks, Travis and Buchanan.

Although small individually, zebra mussels form large colonies in the tens of thousands, coating dock pilings, boat hulls and other structures in the water and clogging water systems and filters. Their sharp edges cut through fishing lines and bare feet. The cuts resulted in stitches and infections.

Delz and his business partner Zac Stacy of Lakeway formed The Mussel Men, a service that preys on zebra mussels by scraping and drying them on land or dumping them in deep water where they cannot survive, both only means authorized by the Texas Department of Parks and Wildlife. Delz and Stacy offer a one-time removal or monthly maintenance plan to help keep swim and boat areas clean.

What neither they nor anyone else can do is completely get rid of the zebra mussels.

“There’s no feasible way to eradicate them from Highland lakes,” said Monica McGarrity, senior aquatic invasive species scientist for the Texas Department of Parks and Wildlife. “All we can do is try to take action to contain them by raising awareness, to encourage people to clean, drain and dry their boats.”

The TPWD regulates the disposal of alien species in Texas. Game wardens enforce department rules and issue citations for what is a Class C misdemeanor when boat owners do not properly clean their boats between bodies of water.

“It is illegal to transport live or dead zebra mussels tied to a boat,” McGarrity said. “Even if you don’t see them, they’ve attached themselves. It only takes one boat that is not cleaned, drained and dried to go to another lake and cause a new infestation.

The fine is $500, but McGarrity said game wardens would rather work with boat owners to comply than write citations.

Clean the boat with 140-degree hot water, then make sure it’s completely dried, she said. Loose zebra mussels can be left in the sun to dry out and die, but to transport them for off-site disposal, they must be tied up in heavy-duty plastic trash bags. TWPD rules effective January 1, 2021 allow disposal of bagged dead zebra mussels in landfills.

For those concerned with removing them from structures in the water, TWPD says to scrape and deposit the loose mussels in deeper water some distance from shore. Only those who ascend to the top can reattach.

Robert Villarreal Jr., owner of Mussel Boys ATX on Lake Travis, researched the subject extensively before going into business. He explained the counter-intuitive idea of ​​leaving the mussels in the water.

“The mussels fall to the bottom of the lake and die there without sunlight,” he said. “Anything over about 20 feet, they have no oxygen and they die.”

He explained that mussels attach themselves to surfaces with threads of byssal, root-like chains of protein that, once cut, cannot reattach. Thrown into sunless water, they die but leave behind many offspring. A zebra mussel can produce up to 1 million larvae per year, and that’s every adult mussel, because they all reproduce.

“If you put your hand in the water and pull it out, you can see zebra mussel larvae,” Villarreal Jr. said. “There are so many that it doesn’t make a difference if you pull them out of the lake. “

“It doesn’t hurt them, it’s not toxic to them, but they don’t like to eat or breed in that copper environment,” Nunn said. “It doesn’t eliminate them, but it does prevent new ones from joining and those that are there from eating and reproducing.”

It’s not so effective in the Highland Lakes because the water is moving too much, he said.

“Think of it like a cloud in the sky,” he continued. “A gust of wind pushes it forward. A cloud of copper will move with the current of the water. They’re good with still water — good in creeks — but not great for a lot of our waterways here in central Texas.

While experimenting with the discs, he also discovered that they either did not last as long as advertised or did not cover the area promised. The advertised 8ft sphere is actually around 4ft, he said, and rather than lasting six months, they last around four – at least in the Highland Lakes.

“It’s still worth it,” he added. “Put it by your swim ladder and see if it works. We were really excited about them at first. They just aren’t as good with our Texas waterways as we hoped.

Research to find more effective solutions is ongoing, McGarrity said, primarily in suppressing populations in localized areas at water and electricity facilities. Zebra mussels caused between $300 million and $500 million in damage in 2012 to power plants, water supply systems and industrial water intakes in the Great Lakes region alone, according to a study by the U.S. Forest Service and from the US Department of Agriculture.

“They’ve only been here since the late 1980s,” McGarrity said. “It’s a relatively short time to develop a silver bullet.”

McGarrity and Villarreal Jr. pointed out that zebra mussel populations fluctuate until they reach homeostasis, or equilibrium with the environment around them.

“The population typically peaks within the first three years after infestation,” McGarrity said. “Once they hit that high point, they can consume so many food resources that they consume themselves outside the home and the house and the population goes down. The food source replenishes, it increases again in a cycle of boom and bust. They can fall to a lower, stable level.

But, again, they will not leave. At least not yet.

“Our goal is to keep our lakes clean and nice, despite the mussels,” Delz said. “I plan to get certified as a diver so we can do more and reach other lakes.”

Until a better solution presents itself, hiring muscle to get rid of mussels can keep swimming areas clear during fishing, boating, and swimming season. They will come back, however, but the muscle can scratch them again.

Who are you gonna call?

Texas Department of Parks and Wildlife