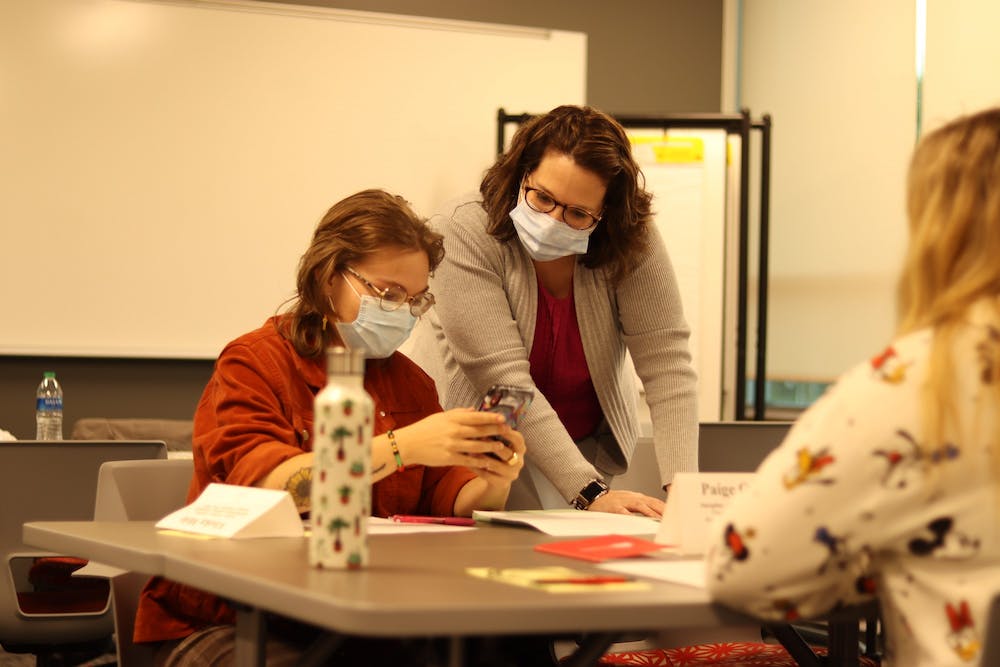 With the tapping of a keyboard and the click of a mouse, a group of students each hit send on an app. They were chosen from a pool of applicants, after presenting who they are through a camera lens and writing a 1,000 word essay on why they should be part of a program that has never been done. previously. Only 10 of these students would be accepted into the program, and they would become “Gen: i.

The program runs from September to April at the institute, located on the Ball State campus in the Oakwood Building, according to the Entrepreneurial Leadership Institutethe website of.

The program has 10 students with different specializations, including psychology, nursing, and business, Coffman said. There was an application process in the spring of 2021, involving a written part and a YouTube video pitch.

Parker Czizek, a major junior in marketing, said he felt he had to sell himself to whoever made the acceptance decisions.

Caleb Sholty, a major junior in human resources management, said he struggled with the written portion of the application, which explained why applicants were interested, what they wanted to do in the future, and why they should be chosen, according to the website.

“I love to write and everything, but I was really sweating when I was writing this paper,” Sholty said.

The essay questions “actually got you thinking,” he said.

In addition to the essay and video presentation, students were allowed to submit other supporting documents or letters of recommendation, according to the Entrepreneurial Leadership Institute website.

Participation in the program costs $ 975, and the money will go towards personal development assessments – tests on students’ psychological talents, personality, leadership, creative talents, innovation and communication styles, and possibly other assessments as the year unfolds, Coffman said.

Students create a personal mission and vision, and also participate in “Lego Serious Play», An artistic way of visualizing business and innovation topics that open up group discussions.

The group meets twice a month and will offer different experiences throughout the year, including a trip to Disney World and the LUME exhibit in Indianapolis. Students are also encouraged to participate in Slack discussions on a weekly basis, Coffman said.

“Gen: i” is built on soft-skills National Association of Colleges and Employers (NACE) are looking for, Coffman said. NACE provides information on higher education, including hiring trends and salary monitoring, and identifies best practices for the labor market.

Some of NACE’s career preparation standards include proactivity in preparing for a career, communication, critical thinking, inclusion knowledge and awareness, leadership, professionalism, a work mindset teamwork and an understanding of technology, according to the NACE website.

On September 23, the group held its second meeting of the year, in person at the institute. With moments of laughter and discussions about their personal lives, the students reviewed their results from the Gallup CliftonStrengths 34 test, which describes student strengths and how those strengths show up in their lives.

Prior to this meeting, Czizek said he wanted to learn more about himself through the “Gen: i” program. He said he doesn’t like being too comfortable and uses innovation to learn from his mistakes. He attributes his acceptance of making mistakes to the way he was brought up.

“I’m an only child and my parents are my best friends and we encourage a lot of collaborative conversations every time we speak. Jokes never die, ideas never die, ”Czizek said. “I have the impression that this gives me a very big advantage, in the sense that I agree to make jokes that do not make people laugh … I agree to be collaborative and open myself to people.”

Sholty said his style of innovation is personality based, which means he wants to learn more about different ways of thinking and behaving with others.

“I’m so used to thinking, ‘Oh yeah, I know what to do, it’s going to be okay,’ things like that, but will I actually be? Do I really know what to do? I think that [creating a personal mission] is a good little way to face that, ”said Sholty, referring to one of the meetings the students will be attending that will discuss how to establish a personal mission and vision.

Another aspect of Sholty’s style of innovation is breaking free from the mindset he’s set to see the big picture, he said.

“I always like to think I’ve figured it out myself, and in a lot of ways I do, but I can’t wait to see what other holes I can drill on my own or what others can do.” , Sholty said.

Although “Gen: i” teaches students about themselves, it also teaches them about others and generates awareness of the differences between them and the people in their lives.

“[The program] allows people to flourish in their personal life, their professional life as an employee, as a leader, as a spouse, as a friend. We say “self-awareness” and “awareness of others” – that just makes you a better member of society, ”Coffman said. “Person X has a completely different approach to mine, but it’s not bad, it’s just different because they see things from a different perspective. It just gives you a different appreciation for them.

When it came to meeting other people within the group, Czizek was happy to put faces to the names.

“I am a human person at heart. I’ve always had the best friends, I’ve never had, ‘Oh yeah, they’re my friends.’ Since I was younger it’s just like, ‘Okay, these are all my best friends, we’re all really close here,’ ”he said. “These are new faces and new people to tell stories to.”

Like Czizek, Sholty said he was excited to get to know people, to see how their minds work and how they behave.

“The year of freshmen is all about meeting new people, doing new things, and adjusting to those things. By the time you’re junior you have your routine, you have your groups, you have your organizations, there’s no reason to get out of that net… ”said Sholty. “When Parker [Czizek] mentioned he was at Miller College of Business for Marketing and was in my class, [it] surprised me a bit that I had never seen or heard of him before.

Coffman said that one of his favorite parts of “Gen: i” is how he brings diverse groups of students together.

“We just have all these different majors coming together,” she said. “What a great networking and networking opportunity and a chance to truly have diverse thoughts and perspectives that you might not get at some other point in your college career. “

Czizek wanted to make more friends and was looking for like-minded people when he entered the program.

“At the first meeting… I was like, ‘This is it. I think I found the people I was looking for, ”he said.

The mixing of different types of people is also something important according to Sholty about “Gen: i”.

“I think [the program just shows] … With the 10 different people who are here… how easily we can come together, how we can find that foundation no matter who we are, ”said Sholty. “We had one thing in common, and that was the interest in this program… [Now], this is the second meeting, and I know these people by their first names, and we joke as soon as they enter the room.

As a pilot group, the 10 students participating in the program are the first of their kind. For Sholty, being the “guinea pig” allows students to set the standard for the future of the “Gen: i” program, he said.

Until then, Coffman and the participating “Gen: i” students will continue to innovate on an unprecedented path, finding and finding themselves in the process.

Brothers Ravena and Kobe Paras made their B.League debut in Japan