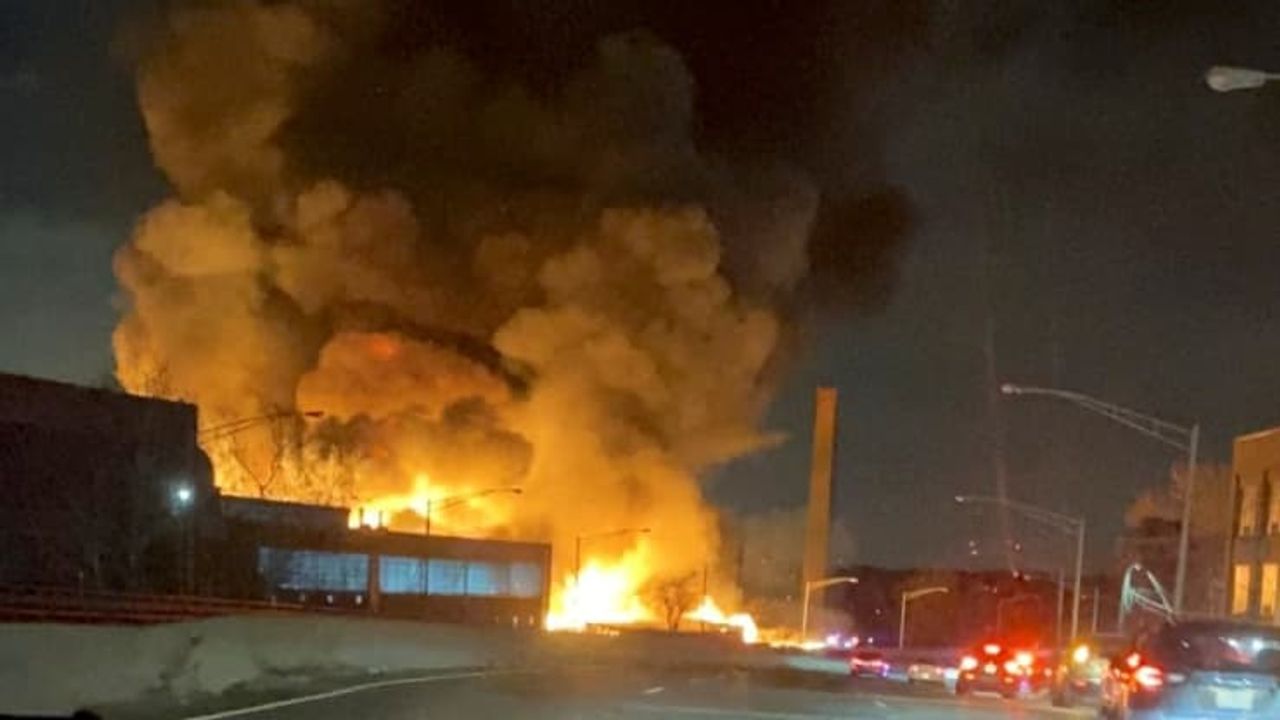 A fire destroys a chemical plant in Passaic, New Jersey

An 11-alarm fire that could have become an environmental disaster broke out Friday night at a warehouse and chemical plant in Passaic, New Jersey. Smoke from the fire was so heavy it was picked up by weather radar, and residents of New York City about 10 miles away could see and smell it. The effort to contain the fire took nearly 24 hours and the mobilization of more than 200 firefighters from the region.

Passaic, which is in northeastern New Jersey, has a population of 70,537. In the late 19th and early 20th century, it housed industries that produced insulated wires, textiles, and furniture. Today, Passaic is one of the poorest towns in the state, and parts of it are considered deprived areas. Its population is predominantly working-class and 39% of residents were born abroad.

The fire broke out at 8:16 p.m. at Majestic Industries, a manufacturer of casino furniture, according to Passaic fire chief Patrick Trentacost. Justin Johnson, a security guard, was checking the building’s water pressure when he noticed smoke and called the fire department. Outside of Johnson, the more than 200,000 square foot building was empty.

The fire quickly spread to part of the building that houses Qualco, a manufacturer of swimming pool products. State data indicates that, on average, the Qualco facility stores up to 3 million pounds of potentially hazardous substances, including more than 100,000 pounds of chlorine tablets. Chlorine can form explosive compounds if mixed with chemicals such as ammonia. When chlorine gas is exposed to moist body tissues, it forms an acid that can damage the eyes, throat and lungs.

Near this hazardous chemical store is Alfred Speer Village, a public housing estate that is home to thousands of residents. The fire posed an imminent danger to their health, to the rest of the densely populated city and to the wider region.

The Passaic Fire Department recently experienced its worst COVID-19 outbreak since the pandemic began, complicating its response to the fire. Nearly half of the department’s 106 firefighters are off work due to COVID. Trentacost himself recently contracted the virus and spent Christmas in quarantine. “It’s unprecedented,” he told NorthJersey.com. “I never thought that in my time I would see something like this.”

The wind and sub-freezing temperatures created challenges for firefighters. The ice caused them to slip and fall, and several fire hydrants had frozen. “Everything turns to ice,” Trentacost told CBS2. “We are losing fire hydrants. Right behind me, they’re working on a terminal that’s frozen. Our matings are all frozen.

The firefighters managed to secure the water sources, even drawing it directly from the Passaic River. The water from the fire hoses formed icicles in the cold. Firefighters doused the building with more than one million gallons of water per minute, according to Trentacost. “We use all water resources,” he said during a Facebook Live event with Mayor Hector Lora.

During the fire, a section of the building collapsed and firefighters were concerned about structural issues in other areas. The fire also halted traffic on nearby Route 21.

If the fire had reached the section of the main chlorine plant that stores the highest concentration of chemicals, massive evacuations would have been necessary. But firefighters were able to control the blaze before it reached this area. Nonetheless, officials urged residents to keep their windows closed on Saturday night.

“It would have been the worst fire I have ever experienced, due to the potential and the negative impact it would have had on our community and the communities around us,” Lora told NJ.com. He expressed uncertainty about where residents could have been safely housed in the event of an evacuation, given the pandemic.

As of 11 a.m. Saturday, the blaze had been downgraded to a four-alarm response as firefighters struggled to bring it under control. Almost 24 hours passed before the fire was brought under control. Demolition of the building began on Saturday evening and Trentacost expected the firefighters’ work to be completed by Monday morning.

No major injuries were reported. A firefighter was taken to hospital with a facial laceration. He was treated and released. About 18 firefighters slipped on the ice and were slightly injured.

Although officials did not consider the fire suspicious, its cause remains to be investigated. Increased use of heaters in cold weather has caused fires at other factories in the area, Lora told the New York Times. It is unclear whether a heater caused Friday’s fire.

On January 29, 2021, just under a year ago, a nine-alarm fire destroyed the Atlantic Coast Fibers recycling plant in Passaic. Conditions were equally cold and icy, and firefighters worked through the night to put out the blaze. At least two explosions occurred at the site and the fire destroyed an entire city block. One person was injured and 70 workers were evacuated.

Passaic’s worst fire occurred on Labor Day in 1985. It started in a warehouse that stored kerosene and diesel fuel and spread through four city blocks, destroying 21 century-old factories, 17 apartment buildings and several houses. Passaic lost about 20% of its remaining industrial base, and a nearby Secaucus firefighter was killed.

These fires are too frequent to be considered accidents. Rather, they are social crimes. Business owners and city and state officials have repeatedly failed to put in place the necessary safeguards to protect the city’s working-class residents. These disasters and the stockpiling of dangerous chemicals in residential areas show the callous indifference of the ruling class to the lives of working people. They are a smaller-scale expression of the same criminality that is manifesting in the state’s response to the pandemic.